Disclaimer: Before I start, this is strictly a political analysis. No talk of potholes or crime or classrooms – not today at least. Let’s discuss what transpired earlier this week.

On Tuesday night, Mayor Mapp called the day’s election results “bittersweet”. The Democrats won, but his Board of Education candidates were handily defeated. Click here for full, unofficial election results.

To be clear, election night for Adrian Mapp was about as sweet as lemon juice. For the second year in a row, Mayor Mapp was embarrassed.

And after a long list of political missteps, it became clear on Tuesday that Mapp can no longer count on support in neighborhoods where he was once unbeatable. 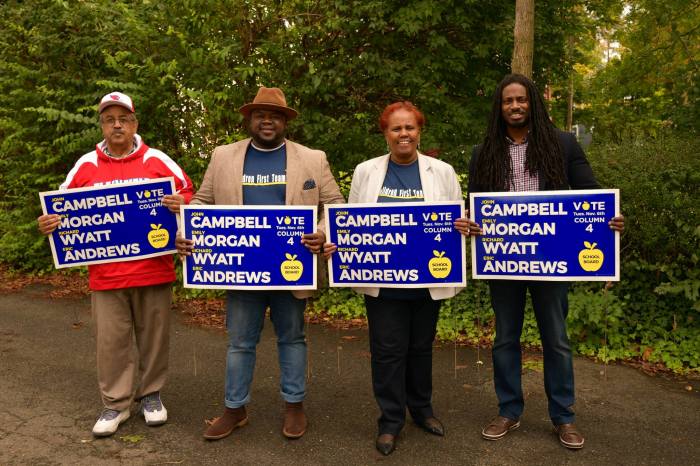 From left to right, the Children First team of incumbants John Campbell, Richard Wyatt, and Emily Morgan – and Board newcomer Eric Andrews.

There was nothing sweet about Monday night for Mapp. All of the Democrats on line A were shoo-ins. Some even ran unopposed. Sure, Menendez won his Senate seat – but that’s far beyond the responsibilities of a mayor and local Democratic Party chair. The only election in question, for Mapp, was the Board of Education.

Elton Armady did face a challenge by political newcomer Ron Johnson for citywide councilor at-large. But with no headquarters and few foot soldiers, he didn’t stand a chance on his own – not without combining resources. Not in November, where no challenger has defeated an on-the-line Democrat since John Campbell did so in the 1980s, years before Johnson was born.

Nevertheless, on Tuesday, the only local race in question was the Board of Education.

Take a look at this map (link for full sized). Citywide, the Children’s First Team won 14,188 to the Mapp team’s 7,055. I took all of the votes for each slate, in each distinct, and compared them. The color indicates the winning team, and the number is their margin of victory.

Since absentee ballots are not sorted by district, they are not shown in this map data. Surprisingly, nine of the eleven candidates had between 107 and 167 absentee votes. Absentee had little impact on this election.

No solo candidates came close to competing with the winning slate. That’s not to say they didn’t compete with anyone. Both Perkins and Watson – aided in part by favorable ballot placement – defeated one of Adrian Mapp’s candidates. But I didn’t include independents in this map aside from in 2-6, one of three important districts we’ll talk about a little later.

From Rock Ave to Terrill Road, Mapp’s “Get MAD” team was demolished. The slate, consisting of Melba Mullins, Alma Blanco, David Graves, and Dorien Hurtt won only one district – the third ward, third district – and by only one vote. It happens to be candidate Dorien Hurtt’s neighborhood, and Hurtt came in third. John Campbell of the Children’s First Team lead the field in 3-3.

Hurtt, you may remember, was removed (link) from the Board of Education earlier this year and inexplicably decided to run. Somehow, Mapp decided to endorse him.

Either way, the Democratic Party was thrashed on Tuesday, and that’s a really big deal.

Political parties have huge advantages in the BOE elections against independent organizers. Money, first of all. No one can fund-raise like the party can. But their advantages begin before the first dollar is spent.

They have infrastructure. While he isn’t working only for the Board of Education race, hired gun and Tom’s River native Derel Stroud works tirelessly – combing through data to make sure all candidates, including BOE, have the best shot to win. 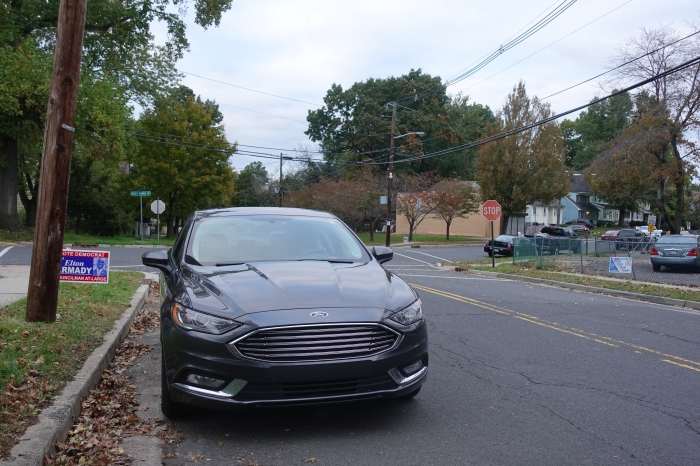 Derel also has the time to put BOE and City Council signs on public property, as I observed him doing at Rushmore Park before the NAACP debates on October 28 – right next to his car. A BOE sign is behind the Armady sign on the left. You can see the other BOE sign to the right, across the street.

The Democratic party even has the resources to conduct polls. I heard numerous reports that their poll numbers had them “looking good” for the Board of Education race. So I guess their pollsters aren’t the best, but at least they have them.

Candidates running with a political party have free, continuously staffed headquarters. They have election-day workers already in place. They can link themselves to “Column A, all the way”. These advantages are immeasurable, and that’s before one check is written.

But there’s one thing you can’t buy or inherit from a political party: enthusiasm. Or Track record, for that matter. Or rapport with the community.

You also can’t buy good campaigning, something blogger Dan Damon never quite realized in his brief analysis (link). The Children First Team ran a nearly flawless race based on record and in their real convictions, plain and simple.

Dan is partially correct though – in that the Children’s First team featured a couple of well-known candidates with long records of community service, both on and off the Board. People with intangibles. Positives acquired over decades of advocacy.

You can’t buy enthusiasm. And that’s part of Mapp’s problem.

Look back at the map (link), specifically at the second ward, sixth district. Two-six is usually a top district for anyone associated with Adrian Mapp and before him Al McWilliams.

In 2-6, the Children First team lost to Mapp’s candidates by only 17 votes – an average of four votes per candidate. Nearly a tie. The real story is who won.

Rebecca Perkins and Tim Priano, only one of whom lives in 2-6, garnered fifteen more votes than all four candidates featured on either slate. That means they won almost 2:1 here, in a race they handily lost in 31 of 34 districts. Perkins and Priano beat his candidates in one of Mapp’s old stomping grounds. The Children First team nearly tied him.

It didn’t stop at 2-6. The Children First Team bested Mapp’s in 2-9 and, to a lesser extent 2-5 – both historically very favorable to Mapp. These are the other two districts in which both Priano and Perkins were very competitive with all candidates. In fact, Perkins won 2-9, where she lives.

A graph showing 2-5, 2-6, and 2-9, usually Adrian Mapp’s strongest districts. The mayor’s team is shown in red, Children First in blue, and non-slated candidates in green.

Perkins also nearly won nearby 2-8 – a Mapp stronghold won by Emily Morgan – where the mayor’s three candidates came in last. The same is true in 2-10. Campbell and Morgan tied to win it, but Perkins did well – and the mayor’s team occupied three of the bottom four spots. 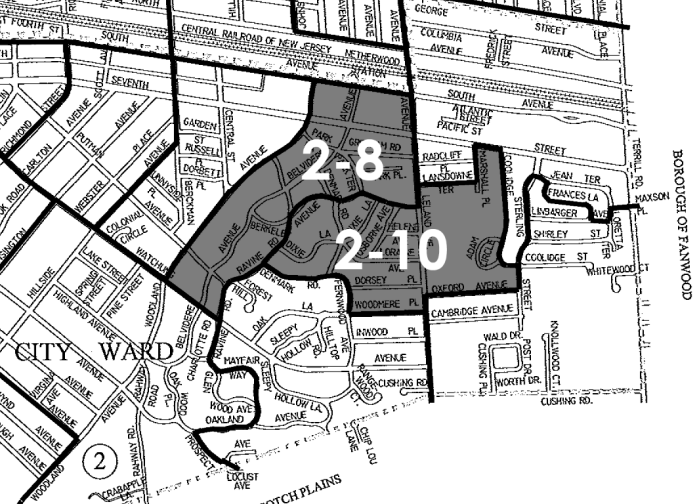 The Mapp team also performed horribly in 2-8, and 2-10, rounding out the top five most reliable districts for the mayor.

Perkins’ candidacy is itself an indictment on the Mayor. She was once an ardent supporter. While Mapp clearly had no shot in this race even with better support in the part of the city most of us broadly call “Sleepy Hollow” – the margin wouldn’t have been quite as wide.

Earlier this year, Mayor Mapp’s own city committee members rebelled against him. Instructed to have the committee nominate Gail Alexander, a former county employee, Mapp was visibly irritated when they selected young newcomer Ashley Davis. He later tried to undermine Davis’ primary campaign.

Mapp has a big problem. He’s not only losing BOE elections in spectacular fashion, but he’s losing his base. And he wishes he weren’t here to see it.

The mayor tried to escape his misdeeds in Plainfield – the ones that costed him an important part of his second ward base. Giving himself a huge raise. Trying to sell historical art work. Proposing privatization of the planning department. The deer hunt. The “Plainfield Promise” scheme. Relaxing pay to play laws. Changing the city charter. I could go on and on with the ways he’s betrayed the public, serving himself and political bosses in Elizabeth and Trenton. His base took notice. Once he gained traction in the Democratic Party structure, he became just another cog in their wheel.

Mapp’s plan was to escape repercussions by joining the NJ State Assembly. This parachute would have shielded him from the impending scrutiny.

But it wasn’t meant to be. Even after he supported Nicolas Scutari’s bid for Union County Democratic Chair, then-Freeholder Linda Carter was given the spot held so long by the late Jerry Green – representing NJ’s 22nd district in the State Assembly. Now Mapp must continue to live in the mess he created. Things don’t look good.

The Plainfield Education Association endorsed three candidates – Melba Mullins, of Mapp’s team, as well as independents Tim Priano and Rebecca Perkins. They had lawn signs. They made noise on social media. PEA President Eric Jones was making several videos per week. They uploaded interviews. But at the end of the day, it seems the PEA endorsement was only worth 100-200 votes, at best.

PEA President Eric Jones speaks with candidates Hurtt and Graves at the last Board of Education meeting before the election.

Many PEA members don’t live in Plainfield, to start – and many of those who do live in town have their own opinions, like any other resident. They are not locked into the choices of the union’s small endorsement committee.

On October 12th a Mullins, Graves, Blanco, Hurtt sign showed up on the front lawn of my mother and I. The sign was placed directly adjacent to our sign in support of the Children First Team.

In years past, without an eye witness, these mysteries would remain unsolved. But it’s 2018. Affordable technology allows us to survey every inch of our property through relatively inexpensive cameras.

At 4:27 PM, we observed David Graves slowly pulling in front of the house. He stepped out of the driver’s seat of his white Honda Accord Crosstour before hesitating at his door. He hesitated again, near the left rear passenger door before going into the trunk to grab the sign placed on our yard.

I am not yet sure how to rip and embed the surveillance video but was able to do this screen shot of Graves in the middle of his prank.

Smile, David, you are the first person caught on camera placing an unwarranted sign on private property. The funny part is, that was the only sign on Pemberton Avenue until later in the month. Graves took the time to prank us, but couldn’t get permission to put a sign on anyone else’s yard.

It all makes sense, though. Graves is best known for being a silly, childish, and nonsensical person in our community. He’s a manchild, honestly. That’s why he got so few votes. It makes sense for him to waste his time doing foolish things – and to be caught in the process.

What doesn’t make sense is a mayor desperate enough to run someone as ridiculous as David Graves for public office. I guess Adrian Mapp lacks the social capital to attract anyone respectable to run for anything.

If history is any indicator, Carmencita Pile and Lynn Anderson ought to cherish the remainder of their time on the Board of Education. They are up for re-election next November.

This also has municipal implications, with City Committee seats up for grabs in 2019. We can talk about that another time.