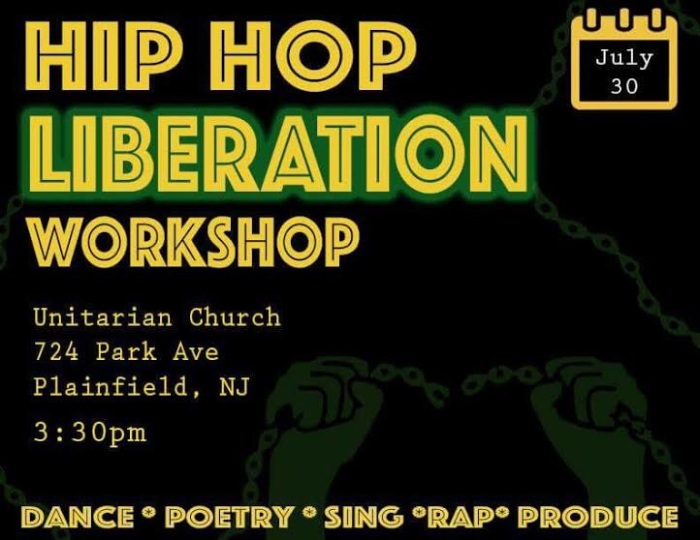 On July 30th, Decarcerate the Garden State is offering the Hip-Hop Liberation Workshop in efforts to educate the public on the current unjust political system that uses the mighty green dollar to oppress people of color. Through writing, poetry, song, dance (or any other artistic form for that matter), artists will be able to express their opinions on the various ways we are oppressed from the shutting down of schools in urban cities to mass incarceration. This is also another way for the community to unite to not only have opinions heard, but to offer solutions for these issues. There will be several stations available for artists to bounce ideas off of one another to help create works of art that are not only fun, but informative. These stations include a writing station, producing station (artists will learn how to make a beat come to life), as well as a recording station. Towards the end of the workshop, those who have completed their projects will be able to share with the group. This project doesn’t stop when the workshop has ended, the goal is to spread your art to someone else in the community to educate them on the issues America has been fighting against for too long. The workshop will be held at the First Unitarian Society of Plainfield, in Plainfield, New Jersey from 3:30PM until 9:00PM. And yes, refreshment will be served.

Since the 1980’s, hip-hop has been used as a political outlet for urban communities across the nation. Who knew that the lethal combination of poetic lines with funky beats, rap, scratching records, and break-dancing would forever be influential for social change throughout history. Violence, police brutality, poverty, oppression, discrimination, and incarceration are just a few of the core issues that hip hop lovers use to get conversations started in hope to bring about political revolution.

We find that in many urban schools, budget cuts are often made from creative curriculum such as music, theater, and dance. The Hip Hop Liberation Workshop will lay the pavement for youth to express themselves in a positive manner on the day-to-day struggles of those living in neighborhoods that have long been forgotten. We are breaking the chains of oppression!