I was supposed to have an incredible, cinematic story to tell. A story of my risky descent into Tiananmen Square in Beijing during a barely five hour layover en route to Vietnam. I’d get there in a cab and return via public transit. I had screen shots of the exact drop off location for the cabbie. It was all figured out. 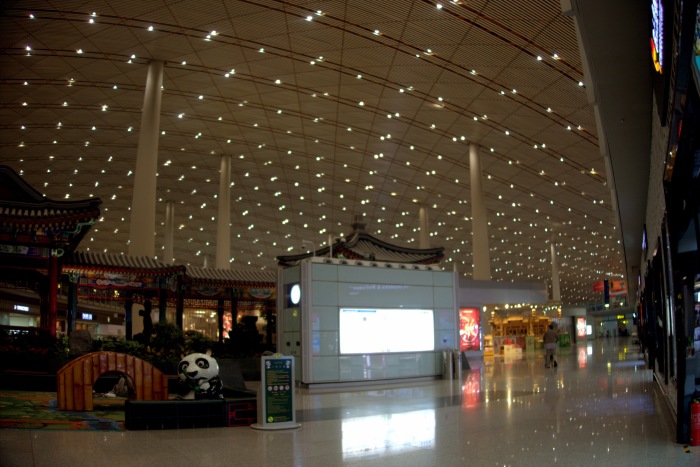 No photo can express how massive Terminal 3 at Beijing Airport is. It’s one of the largest buildings on earth.

Because I’d have to pass through customs, get a 72-hour visa, with money from an ATM, and re-enter security, leaving the airport was condemned by most people I could find to ask on the internet. Some seemed almost offended that I was considering it. Apparently, like the Wu-Tang Clan, Beijing traffic is nothing to mess with.

It sounded like my type of thrill, though, and I planned to do it anyway – with a plan B in case of expressway disaster. I still maintain it would have worked. 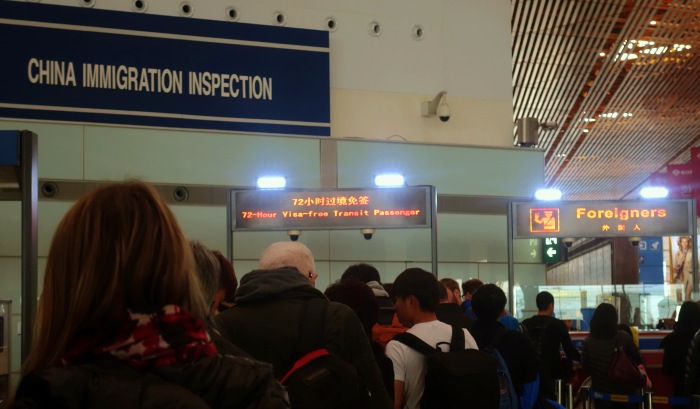 The line for a 72-hour visa

In line for my visa, a customs agent told me that I couldn’t leave the airport as I had a checked bag going to another destination the same evening – a bag so small I could have easily brought it on the plane.

Just like that, an adrenaline-fueled dash through Beijing was cancelled. I had a case for leaving, but I don’t argue with people in airports, especially following my back room pad down in Newark on my way out. If you were wondering, I hadn’t argued there, either. When traveling alone, I’ve come to expect that treatment, or worse, in American airports.

Either way, I was condemned to five hours in the massive Terminal 3 of Beijing Capitol Airport. With no Google, Facebook, Instagram, Yahoo!, Wikipedia, WordPress, American newspapers, etc in mainland China, Chinese airports are especially boring.

Without the Western internet, sleeping was a solid choice

Beijing may still be in the cards, however. Vietnamese Airports are notorious for delays, and Air China gave me a razor thin one-hour and twenty minute layover in Beijing for my return to Newark. Should I miss my transfer, I’ll have to wait another 24 hours for the next flight. What a pity.

Beijing was not the destination, though. That was Saigon.

Ho Chi Minh City, or Saigon as it still seems to still be known colloquially, is Vietnam’s largest city as well as its cultural capitol. The bustling commercial and passenger port lies on the Saigon River. Almost eight million people live in the city.

Me, along the Saigon River at Sunrise

My plan was to observe Saigon from the street, and that’s what I did today – aside from a massage. I didn’t want to be yet another person looking at Vietnam was a place of war, and instead see what sights and experiences it has to offer in 2015.

A statue of Ho Chi Minh in fron of City Hall

Through my wandering, I realized how silly this idea was for a traveler with limited time and no skills in Vietnamese. After all, Ho Chi Minh City is renamed for a revolutionary marxist leader whose movement kicked out the French and then the Americans.

Its main attractions are the War Remnants Museum, the Ho Chi Minh Museum, the war-era Cu Chi tunnels, and the Imperial Palace, the latter of which was the headquarters of the US lead South Vietnam forces. Images and statues of “Uncle Ho,” as he is known here, are everywhere – as is leftist revolutionary art.

I learned from walking the streets that Saigon itself is a celebration of independent Vietnam – a country occupied by foreign forces for the better part of 1,000 years prior to 1975. Independent Vietnam is new, and war and occupation are a central part of its history.

I’ll be back in Saigon next Sunday to take in the museums and historical buildings I missed, but in the mean time here is what I saw from the street today.

Admittedly, at least during the daytime, Ho Chi Minh City is extremely tiring. I’ll be the first to admit my bias – it’s not the most photogenic city, and I love to take pictures. But there’s more to it.

The noise from endless lines of motorbikes, the exhaust, the difficulty of crossing the street, the degraded air quality, constantly avoiding people offering you a ride or other services. Not that I think a big city should stop buzzing to make me comfortable or anything. 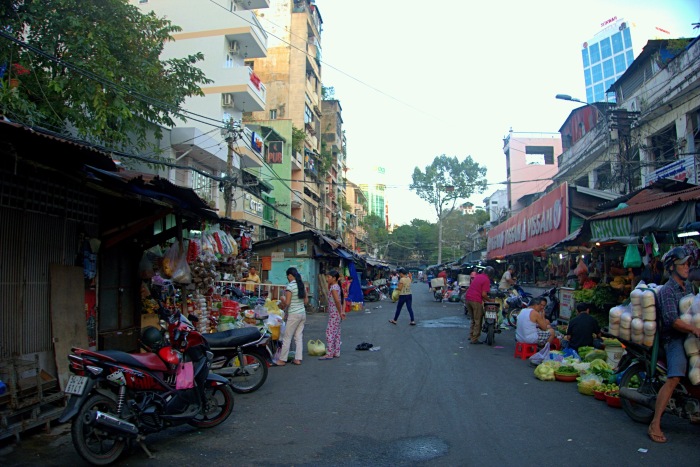 Through one of the city’s largest parks 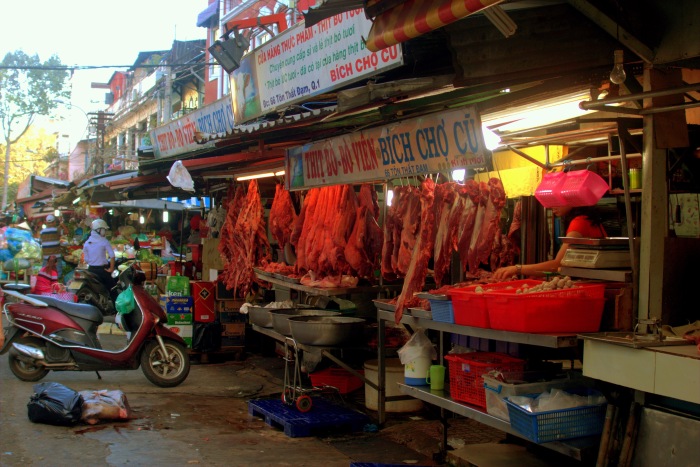 I ate at this wonderful Buddhist restaurant. Finding vegan food that I can be sure is vegan is a real challenge, with the language barrier. 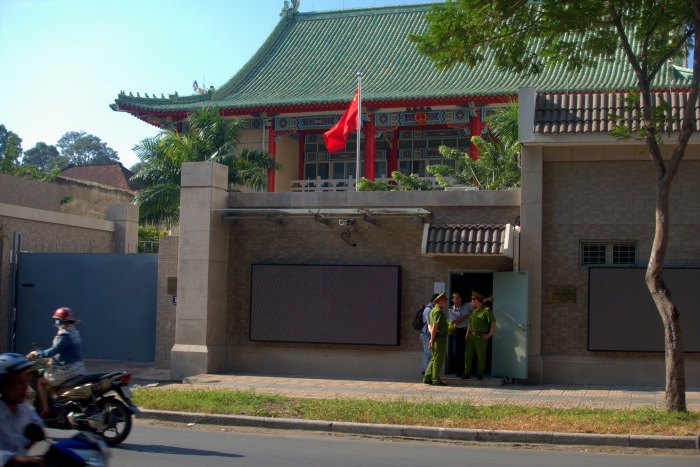 Some soldiers having a discussion

Then telling me to stop taking pictures of them. I smiled and apologized. It’s all love. I don’t want problems.

These soldiers bring up another issue for me in Saigon. I feel like a bumbling idiot. Walking into places I don’t belong, taking pictures of people I shouldn’t, likely overtipping like a mad man. Of course there is the language barrier, but I’ve never been anywhere where I so obviously did not belong. Even in non-Western Morocco, my miscues – like nearly walking into a mosque – were covered up by an ability to blend in. No such luck here. One women even said “Where you from, New York?” Close. 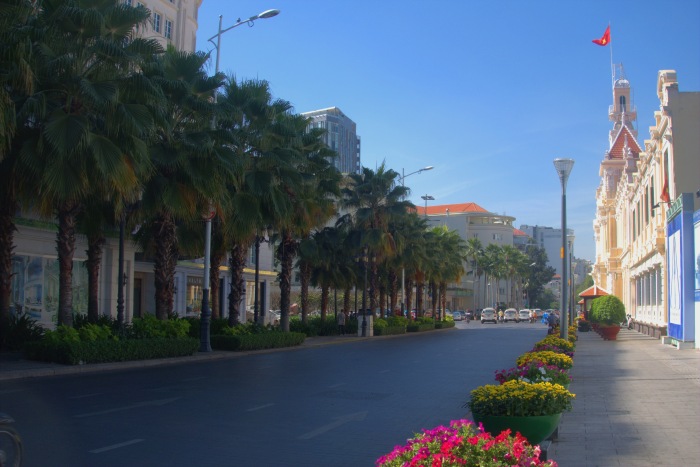 The boulevard in front of city hall 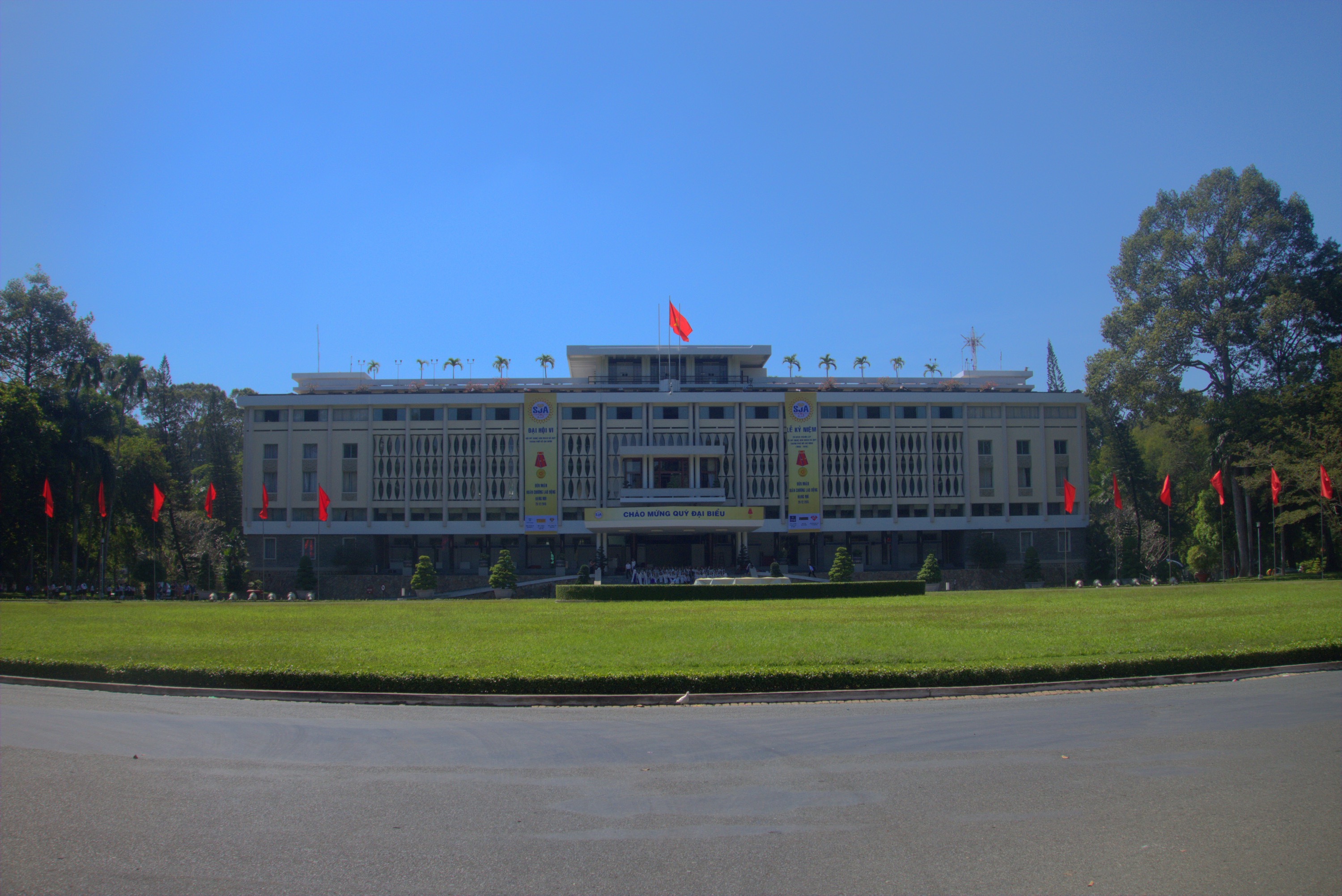 When the North Vietnamese broke the gate on this Imperial Palace, the Vietnam War, or the American War as it’s called in Vietnam, was over in 1975 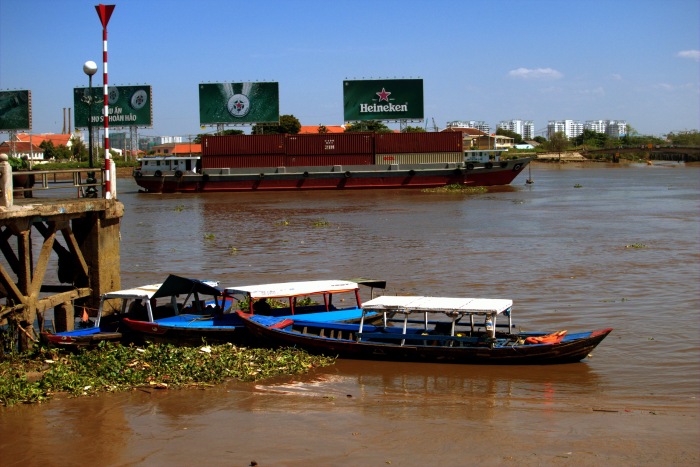 River tours are offered in these boats 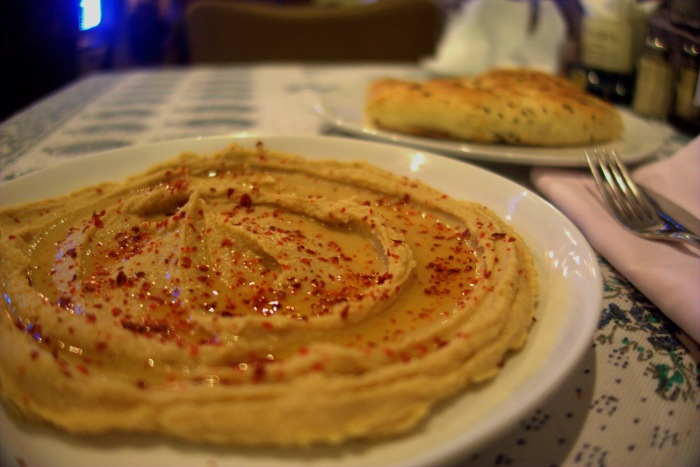 The host was very excited to pull me off the street and tell me about all the halal items on this Turkish restaurant’s menu. I’m not Arab nor Muslim but I do love this food.

I found the Belief and Islam book right in the middle of the alcohol interesting. In case you assumed they weren’t devout because of the bar, they want to remind you that they are. I like that.

The high in Saigon is nearly 95 degrees fahrenheit almost every day this time of year. At night it’s in the mid 70s. The streets and sidewalks become less congested, with less exhaust. Rooftop bars open, as do a host of new photo opportunities. It’s after nine right now on Monday night, so I’m going to go out and enjoy.

Early tomorrow morning I fly to the island of Phu Quoc where I’ll spend the better part of three days living in a wooded bungalow near the beach. I’ll bet it’s a lot more photogenic than Saigon.

5 thoughts on “To Saigon”