It’s great when residents decide to clean up their city – when they take a problem into their own hands and fix it. They put on their gloves and give hours of their time to remedy a problem government refuses to fix.

I’ve participated in clean-ups in Plainfield and elsewhere. Once, I even spent the better part of two weeks in waist high boots cleaning out a state-owned river outside of New Jersey. We removed shopping carts, iron fences, and fishing rods, toilets – you name it.  The fact that this trash was in the river for decades was failure on the part of the government, and we were rectifying it.

While clean up is admirable, it does bother me when elected officials who are responsible for keeping our city clean encourage residents to do it themselves. Plainfield City Council members Steve Hockaday, Elton Armady, and Joylette Mills-Ransome are encouraging residents to clean up this Saturday, February 29 – beginning at the corner of Grant Avenue and South Second Streets.

Saturday morning’s clean up will begin at the corner of Grant Avenue and South Second Street. Even from this aerial view, the trash on the west side of the street is glaring.

For years, the City Council and mayor have decided not to enforce trash and debris ordinances – especially in the fourth ward. Yet they’d like tax paying residents to come out with them and clean up.

The Mayor – along with his five underlings Steve Hockaday, Joylette Mills-Ransome, Elton Armady, Barry Goode, and Charles McRae – can administratively create conditions where the deplorable trash situation in the fourth ward didn’t exist in the first place. The people with the power to eliminate the problem are asking folks who already pay taxes to put on their gloves and take care of this issue on their own free time.

The real irony is that these council members – had I not written this post – would have taken pictures of themselves cleaning up the mess that they’ve created. They’d likely use it on campaign material or at least social media. Councilman Hockaday, who is in the middle of an election right now, has announced that he will cook breakfast at his home for volunteers, before heading out to rectify Plainfield City Council neglect.

Trash near the NJ Transit bridge on Grant Avenue.

Imagine if, after a haircut, your barber or hairdresser gave you the broom while they held the dustpan and helped you sweep up your own hair. Maybe they also ask you to Windex their mirror as they get a head start on the next customer. This is no less ridiculous. As a taxpayer, a clean city is part of what you pay for.

I’d like to counter that. Enforcement is needed, from you. What we need from you is public garbage cans near corners that accumulate trash. We need a city council who has the will to do something about this. That’s the only way to fix this problem long term. 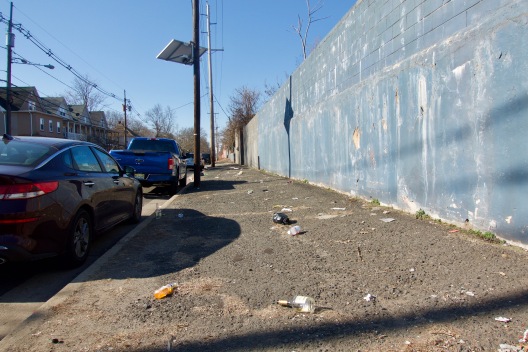 This part of South Second Street, near Clinton Ave, is particularly bad.

A view up Clinton towards the bridge.

One thought on “The ruse of Plainfield City Council Clean Up”