I want you to take a look at lot 8 in Plainfield. It’s located on Watchung Avenue, right behind the first block of East Front Street downtown businesses.

Lot 8 has become atrocious through years of decay and neglect by Plainfield leadership. And while it has relatively new, modern parking meters – the paint job is so bad that you can hardly see the space numbers needed to buy a ticket. The fences are in disrepair and trash is all over the place.

Contrast lot 8 – and almost all the other downtown municipal lots – to the brand new pedestrian mall the City Council approved earlier this month. It will close off pedestrian traffic on North Ave and Gavett Place between Park Ave, Watchung Ave, and East Second Street. The City Council believes so much in this mall that they were willing to send taxpayers $2.1 million into debt for its construction without even completing a parking study – or other analysis – on the effects of the project. The City Council has so much blind faith in this under-studied project’s success that they’ve overlooked how more than 8 in 10 pedestrian malls fail. 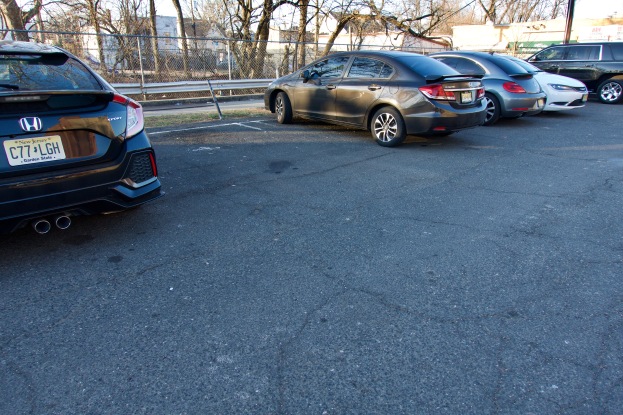 Municipal lot 8 is in awful shape, as shown by this row of cars with nearly invisible both spot numbers and lines.

Meanwhile, lot 8 is a much needed, working parking lot. It’s integral to the daily lives of thousands of residents, customers, and business owners. As the Plainfield Democratic Party has been headquartered adjacent to the lot for three years, our leaders have seen its disrepair first hand. Nevertheless, lot 8 can’t get as much as a coat of fresh paint so that cars can park properly – and so that residents and visitors have a feeling of dignity while shopping and running errands.

What you have is a city administration that values future investment over current residents. Future businesses over the ones here now. In fact, they will saddle the rest of us with over $2 million of debt for a risky project to ingratiate themselves with people who aren’t even in town yet. But we can’t get paint. We can’t even have fading downtown crosswalks repainted.

Even from an aerial photo, where we can’t see all the trash, we can still make out lot 8’s disrepair – missing lines and numbers.

Well, sometimes we do get paint. You may remember the ill-fated rainbow crosswalks the Mapp administration rushed to implement at East Second Street’s intersections with Roosevelt and Park Avenues, right before an election. This proves that the city knows how to paint asphalt when it’s politically expedient (even if the paint peeled up and faded away within months, for one of these). The city may even paint lot 8 before Election Day in June of this year, or before Mayor Mapp runs for re-election in 2021.

But there is no excuse for a city that treats some of us like lot 8, and the rest of us like pedestrian mall. Some of us are so-called “Walking Wallets”, as the mayor likes to say, and the rest are – what – The Walking Dead? 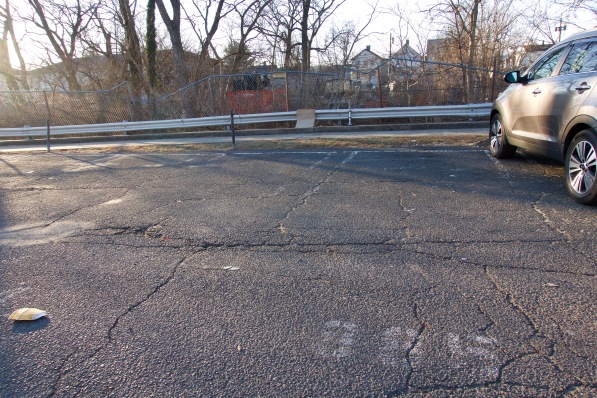 Money plays a part here, too. Developers have given at least $25,000 to Adrian Mapp’s re-election campaign. I say “at least” because it’s hard to count it all, as we don’t know everyone who is a developer or one of their relatives. Mayor Mapp will use this $25,000+ to fund the campaigns of Charles McRae and Steve Hockaday against the grassroots effort of Emily Morgan and I. Both of our opponents voted “yes” for the pedestrian mall, and only two councilors – Ashley Davis and Sean McKenna – voted no. If they had two more votes on the council, their opposition wouldn’t have been in vain.

This problem is more than just campaign money and neglect. It’s also a sort of politics that chases big, momentous, headline-grabbing home runs. The pedestrian mall will be heralded in the short term by a media who will never know or speak of the disrepair of lot 8. Just as the Courier News, who writes what seems like advertisements (link) about the tax-abated Quin at Sleepy Hollow, has never said a word about how local contractors are almost never used – as promised – on these sorts of projects. The Mapp administration will mail out pretty pictures of the new pedestrian mall to impress residents that something is going on in Plainfield. A big shiny object. Right before he runs for re-election.

In recent years, developers are flocking to every town or city with a train station – and Plainfield has two. But their campaign contributions and headline-generating potential doesn’t mean that we should develop on developers’ terms. The city has leverage and should use it to benefit those of us who live here.

That means respecting the South Avenue master plan instead of building a Wawa there. It means creating and effectively marketing robust recreation programs, and conducting a feasibility study for a community center. At the very least, this means painting and cleaning up our municipal parking lots. 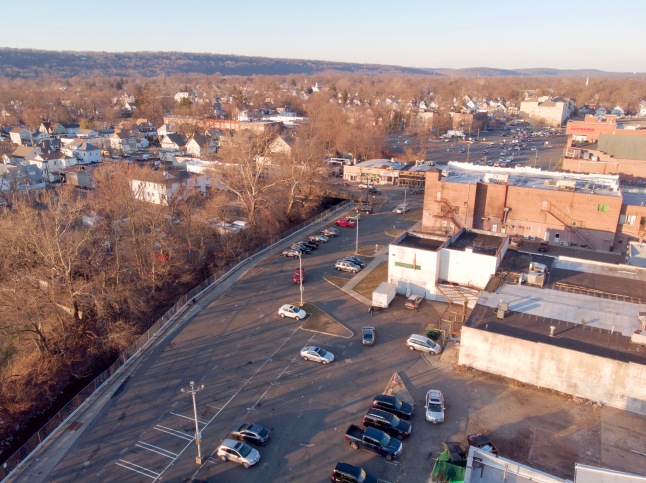