Late last week, I began to see rumors online. The rumors alleged that Plainfield Fire Chief, Frank Tidwell, was filing lawsuit against the mayor. But that’s all I knew. No context. No details.

Then something interesting was given to me late Saturday night – the lawsuit itself, written by the Law Offices of Gina Mendola Longarzo, LLC.

Plainfield Fire Chief Frank Tidwell has indeed filed a suit against The City of Plainfield, Mayor Adrian Mapp, City Administrator Rick Smiley, Mapp-appointed Director of Public Safety Carl Riley, and other associated people and entities. It was filed on Friday.

The lawsuit alleges “clear conspiracy between Director Riley and Deputy Chief Jeffrey Courtney to terminate his employment as Fire Chief” though discrimination, acts of harassment, and bogus investigations. I’ll take you through the details. 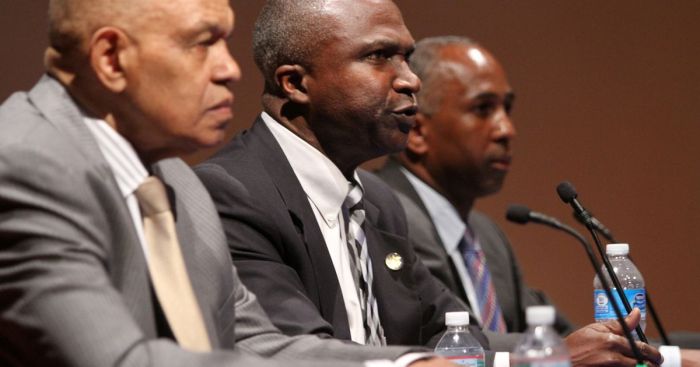 Frank Tidwell, 62, was hired as a Plainfield firefighter back in 1980, promoted to the rank of Lieutenant in 1989, Captain around 2000, Battalion Chief in 2003, Deputy Chief in 2008, and Fire Chief in 2011 – during the Sharon-Robinson Briggs administration.

Towards the end of Robison-Briggs second and final term, Tidwell opposed a plan he considered “racially motivated”. Robinson-Briggs wanted to promote a black Lieutenant, Kenneth Childress, to the rank of captain even though he was fifth in the civil service exam, says Tidwell. The suit alleges that after Tidwell’s resistance, the administration decided to promote all five candidates in order to promote Childress, despite their being only one open Captain spot.

In early 2014, Mayor Adrian Mapp assumed office and appointed Carl Riley as Police Director and Director of Public Safety – the latter position making him the head of both the Police and Fire Departments, as well as Tidwell’s supervisor.

Mapp and Riley are alleged to have conspired to consolidate police and fire union support and “clean out supporters of the prior administration”. Tidwell, promoted to chief by Sharon Robinson-Briggs claims to have been be an easy target, due to his age (then 59) and the union’s general disapproval of the way he spoke up about what he called “racial gerrymandering”.

The first move, according to the suit, was a frivolous claim by a fellow firefighter that Tidwell had put him in harm’s way in a structural fire. Riley quickly banned the chief from responding to such fires, a key duty of his. The lawsuit claims this was the first of many attempts to undermine him.

“Why don’t you retire?” is what Tidwell claims Carl Riley said in his office, on May 29, 2014, in the presence of Deputy Chief Courtney – his likely replacement.

“Your continued mentioning that I should retire does not sit well with me; especially when it is said in the presence of Deputy Chief Courtney, who is my subordinate,” wrote Tidwell a day later. The lawsuit alleges demands these that he retire constitute ageism, as he is only able to retire because of his age. 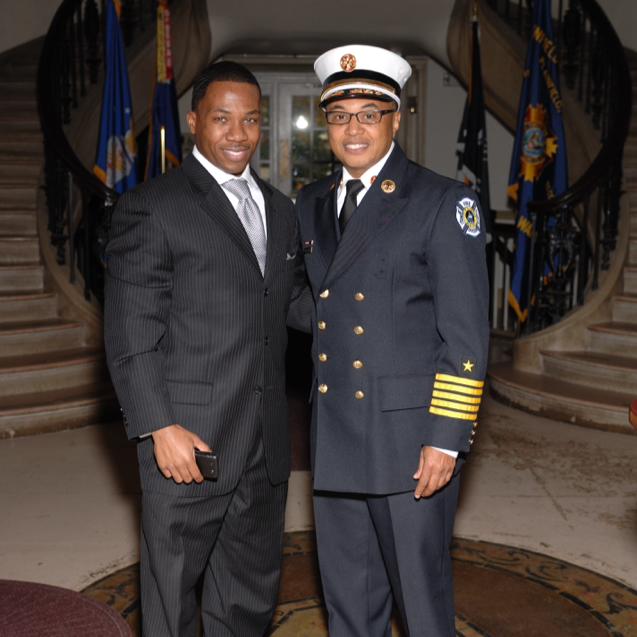 Frank Tidwell (right) and his son at City Hall. (via Facebook)

In March 2015, the administration began to totally cut the Chief from the Fire Department’s disciplinary process, according to the suit, by “refusing to disclose information regarding a firefighter whom Deputy Chief Courtney suspended while Tidwell was on vacation.” Tidwell says he complained to City Administrator Rick Smiley, and that the City ignored the complaint.

That May, Deputy Chief Courtney filed a discrimination suit, Courtney v. City of Plainfield, where he alleged Tidwell discriminated against him because of his race. Jefferey Courtney is white.

It’s a seemingly absurd claim, considering Tidwell serves as chief and would have to retire for Courtney – the Deputy Chief and likely next-in-line – to serve in that capacity. “That Tidwell is committing an act of racial discrimination by not retiring (when he is under no obligation to do so) is, frankly, laughable,” says the suit.

Tidwell responded two days before Christmas, 2015, with his own hostile work environment grievance, accusing the Mapp Administration of allowing Riley to “antagonize, usurp authority, disregard orders of the Fire Chief, disrupt morale, [be] combative with other employees.” The City again refused to investigate, according to Tidwell’s lawsuit.

Things only got more serious. On August 25, 2016, Public Safety Director Riley ordered Frank Tidwell to immediately cease all renovation work being done on the Firehouse. Tidwell was using two off-duty firefighters to complete some needed repairs.

Riley reportedly wanted all work ceased due to “concerns raised regarding the renovation of your office.” Tidwell says Riley claimed an “anonymous” person – allegedly Mr. Courtney – tipped them off.

According to the suit, Tidwell stood accused of misappropriating funds by engaging in the common practice of using off-duty workers to make repairs.

The Mapp Administation allegedly performed no internal investigation and gave the matter to the Plainfield Police Department and the Union County Prosecutor’s Office.

Frank Tidwell filed his last grievance with Rick Smiley, again complaining of a hostile work environment and this time, a “smear campaign,” according to the lawsuit.

But the criminal investigation continued. In the suit, Tidwell expressed dismay that his subordinate, Sergeant William Tyler of the Plainfield Police Department’s Office of Professional Standards, was the lead investigator.

On December 13, 2016, Councilwoman Diane Tolliver told News 12 that she had problems with the conditions in Plainfield’s three firehouses, according to the suit.

Tidwell claims that he was subsequently the target of “malicious slander” on the part of City Administrator Rick Smiley, who allegedly told News 12, “the administration … made available an additional $160,000.00 for firehouse building improvements in 2016,” but that Tidwell “has yet to utilize these funds.” There was reportedly no mention of the August 25 order to stop all renovations.

The lawsuit claims Tidwell wrote to Smiley on December 21, 2016, telling Mapp’s City Administrator that he didn’t know about the $160,000, and requested documentation showing the existence of such funds. He also wanted a correction to be sent to News 12. He says no documentation was ever given, and no retraction was made.

And then, according to Tidwell, it all ended. Tidwell claims he was called into Director Carl Riley’s office. Riley reportedly apologized for undermining Tidwell’s authority, and assured him that he’d be allowed to run the Fire Department. He reported called Deputy Chief Courtney “no good”.

The lawsuit alleges Director Riley assured Mayor Mapp and City Administrator Smiley that he and Tidwell were “on the same page” following a Febuary 10 promotional ceremony. Mapp and Smiley were reportedly “visibly relieved.” Weeks later, Tidwell says he was told he could continue with renovations.

He was stunned. Why did everything change?

It wouldn’t be long until he learned the reason, according to the suit

These recordings, presumably still in the possession of Tidwell, are said to reveal “the active conspiracy between Deputy Chief Courtney and Director Riley to fabricate accusations against Tidwell and to offer him an ultimatum to either retire of face criminal charges and be terminated.”

On one of the recordings, Director Riley is alleged to have asked Courtney to investigate Tidwell’s conduct. Courtney, in turn, is reportedly heard agreeing “to covertly provide him dates, pictures, and prices of the work being done and to put the evidence in an unmarked manila envelope.” Riley reportedly agrees to protect “whistleblower” Courtney.

In another recording, Riley is alleged to boast, “Chief Tidwell thinks he’s Teflon. You saw what I did to Kenny Reid.” He reportedly references other officers he’s terminated or forced to retire. 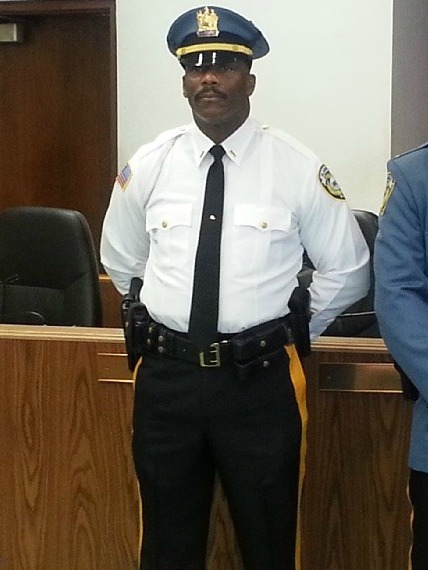 Beloved Lieutenant Kenneth Reid (via The Pulse of Plainfield)

We’ve always heard these rumors about what really happens in Mapp’s City Hall. The climate of fear and intimidation that persists over there. It’s interesting to finally get a closer look.

This is a public document. I will upload the full lawsuit tomorrow.

9 thoughts on “Mapp Administration top cop, “You saw what I did to Kenny Reid”, according to lawsuit”