On Saturday, my friend Dana and I landed in New Delhi, India around noon. We took the long way – first flying fifteen hours to Guangzhou, China, before boarding a six-hour flight to the Indian capital after a two-hour layover. A direct flight to India would have been around 13 hours. There’s a silver lining though. On the way back we will have a nineteen hour layover in Guangzhou – which will allow us to experience the city a bit.

We are staying in the New Rajendra Nagar area in Central Delhi.

Dusk Saturday, from the rooftop of the building where we are staying.

On Sunday, we decided to go to the Taj Mahal, a few hours away in the city of Agra. Since we will be traveling to another city tomorrow, and the Taj Mahal will be closed on Friday, our first full day after we return to Delhi. 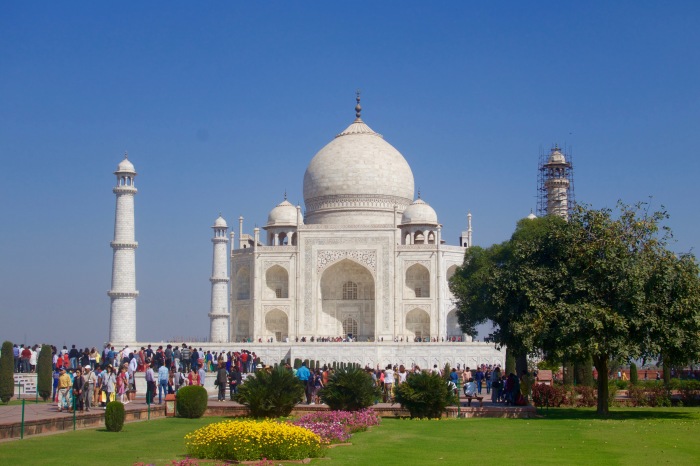 The Taj Mahal! It has an interesting story, and while using a guide provides less photo opportunities, I appreciated being able to learn the history what I was seeing as I was seeing it. Usually, I google places after the fact to learn their significance. 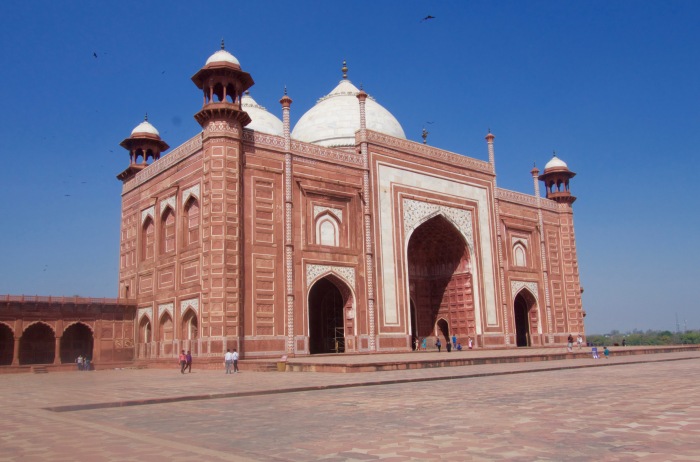 That being said, I don’t have the energy to retell its story here. I do know that this is one of two guest houses.

The Yamuna River, behind the Taj. 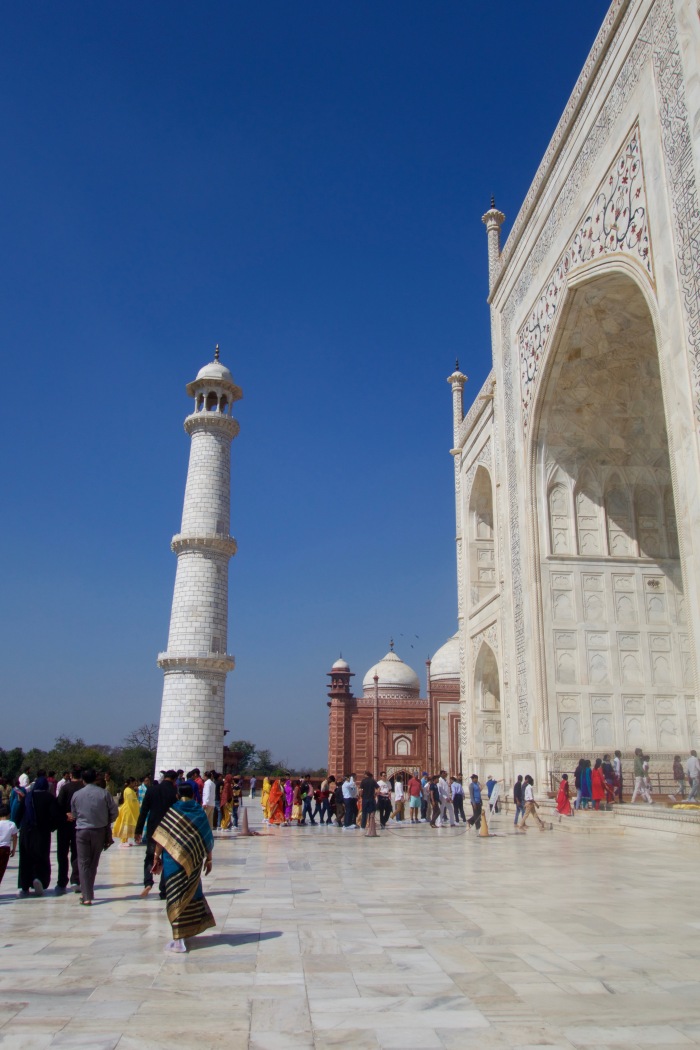 I expected the Taj Mahal to be beautiful. I was surprised, though, by the lack of Western tourists. There were very few. 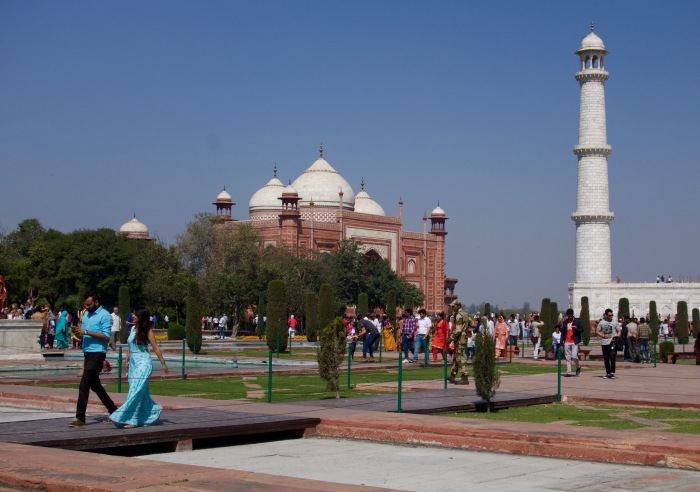 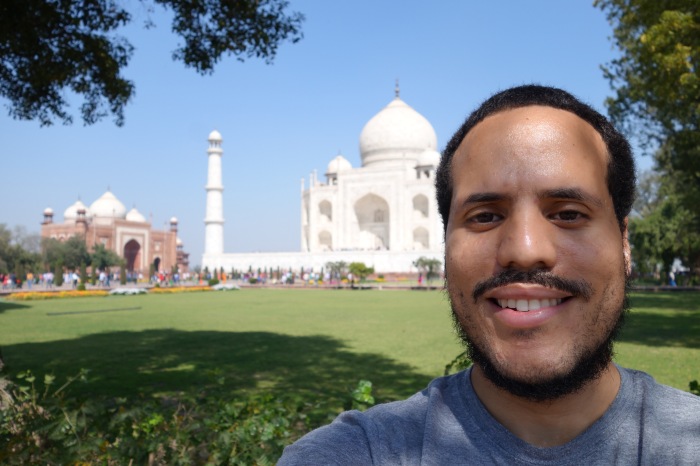 Next we went to the Agra fort, a short drive from the Taj Mahal. It was built just following the completion of the Taj Mahal in only seven years, by around 15,000 men. It took 20,000 men to build the smaller but much more ornate Taj Mahal in 21 years.

As an architect, I appreciated this roof drain – the most ornate I’ve ever seen.

The Taj Mahal as seen from the Agra Fort. 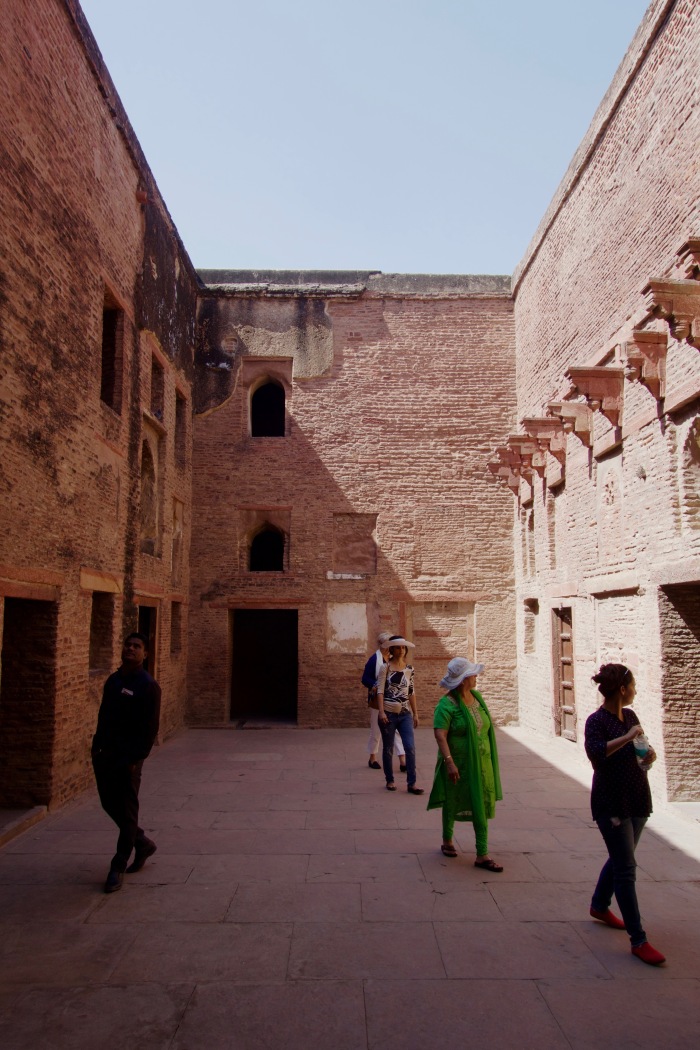 A little history here – Shah Jahan, who commissioned the Taj Mahal in honor of his third wife – was jailed in this part of the fort by his own son. According to our guide, the son was angered by his father’s desire to build a second Taj Mahal, in black, while poor people struggled.

I saw Agra mainly from a car window, unfortunately – so couldn’t take many photos. The rest of the trip will involve a lot more walking. Either way, I did notice that there were a lot of cows in the streets of Agra, often blocking traffic.

Thanks to a tip from a friend from high school, tonight we ate at Bukhara Grill in the affluent Chanakyapuri neighborhood of Central Delhi. The food was great.

It’s 1am now in Delhi, on Monday morning (2:30pm on Sunday in New York). I’m going to get some rest. Tomorrow around noon we board a plane to Jodhpur, the “blue city” of Rajasthan.