I am serving my first year as a member of the Plainfield Board of Education. The following article is my opinion, and is in no way reflective of the views of the entire board.

What do advocates for the privatization of public education do when they take from tens of thousands of public school students? They make sure charter schools are not caught in their noose.

Back in 2008, the New Jersey State Legislature passed the School Funding Reform Act (SFRA), a weighted formula for financing PK-12 Education in our state. This act was supposed to finally bring more equity to school funding, as districts were being short-changed as their needs and student populations fluctuated.

The SFRA took into account that it becomes increasingly expensive to educate students as they age towards graduation, and that vocational schools are more costly than traditional. It also improved special education funding, and weighed the numbers of at-risk students and those with limited English proficiency – among other considerations.

Not surprisingly, Governor Christie has refused to follow the requirements of this act, passed right before he took office, leaving state funded districts in the red based on need. Plainfield is one of the most underfunded districts in New Jersey when it comes to state K-12 aid, according to data from the Educational Law Center. This year alone, the district would receive $22.1 million more if the SFRA was followed. The total loss in funds since 2009 has been above $70 million, and the majority has come over the past four years.

As explained in the August business meeting, the Plainfield Public Schools are facing a projected $11,180,431 shortfall for the 2017 fiscal year, which begins in July 2016. While gross state under-funding is part of that story, districts have, for the most part, learned to operate under those constraints – however painfully they must do so. Unfortunately, the attack does not end there.

Christie’s refusal to follow the law should have an effect on charter schools as well. The Charter School Program Act of 1995, also passed by our state legislature, sets strict guidelines on how much charter schools are to be paid relative to the per-pupil costs of educating each student in district.

Basically, when funding to a district is cut, so too are its payments to charter schools for students who choose to attend them.

Not under governor Christie and the New Jersey State Legislature.

While Christie refuses to adequately finance some of New Jersey’s neediest school districts, he and the Legislature have inserted language into the budget to ensure that the state’s charter schools can better keep their heads above water, both this year and last. As if ignoring the SFRA wasn’t enough, Christie and the majority Democratic State Senate and Assembly thumb their noses at the Charter School Program Act of 1995, too. 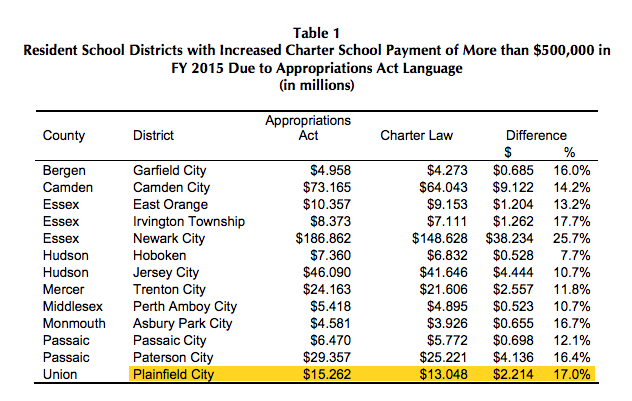 A state report found that Plainfield overpaid by $2.214 million in fiscal year 2015.

A state report found that Plainfield will overpay by $2.292 million in fiscal year 2016.

Essentially, these escalating budgetary cuts don’t exist for charter schools. According to a non-partisan State Legislature budget analysis, this over-payment has cost the Plainfield Board of Education $4.5 million in fiscal years 2015 and 2016 (see above), and is likely to cost us at least another $2.5 million in fiscal year 2017 with the increases in charter enrollment. This alone represents $7 million dollars of the projected FY 2017 $11 million deficit.

Then there are other factors.

College Achieve Central Jersey Charter School, which I wrote about this Spring, is going to be larger than expected for its first year in Plainfield. When Mike Piscal made his application to the New Jersey Department of Education, he estimated that the school would draw 69% from Plainfield and 31% from North Plainfield.

Drawing from two districts looks better on a state application, regardless of where you plan to do the most aggressive recruiting. Keep in mind that Plainfield pays charter schools more per pupil than our neighbors to the north.

This year’s figures show that 97% of College Achieve’s students enrolled are from Plainfield. That change in projected size will cost the district between $800,000 and $1,000,000, alone, and College Achieve, which plans to grow annually, will cost the district a total of $2.3 million this year. Click here for the amount that our district pays to all charter schools, including the five located in Plainfield, as reported in our August business meeting.

This graph, showing payment owed to College Achieve Central Jersey Charter School, was part of a finance presentation during a summer BOE meeting.

As I explained in an interview with Black Agenda Radio, the loss of students from a new charter school does not bring upon a proportionate reduction in operating costs, if any, as charter schools grab from broad geographical range. It isn’t as if we will lose many classrooms or support staff.

The good news is that surplus will cover this deficit for fiscal year 2017. There is a short term solution, at least.

But surplus is a finite resource, and long term the picture is far more grim. The state of New Jersey’s refusal to pay districts the funds they deserve and the over-funding of charter schools will become growing problems for which this district, and many others, must find difficult long term solutions. Millions of dollars in lost money will undoubtably have a grave impact on students and the community.

We must demand that Chris Christie and the New Jersey State Legislature cease to steal from the neediest public school districts while keeping charter schools afloat. Language that allows for charter over-payment must be removed from next year’s budget.

The Highland Park and Paterson Boards of Education have already passed resolutions demanding that the Legislature take a stand and eliminate that language. In fact, you can read Highland Park’s resolution, which has been accepted in principle by the New Jersey School Boards Association and should be up for vote at the next School Board Delegate Assembly meeting on November 26th.

Seven million dollars in over-payments on top of $70 million in underfunding over the course of the past six years is nothing short of theft, and the blame falls on a bipartisan coalition of our leaders in Trenton. This includes the two-thirds Democratic State Assembly and Senate. They must be held accountable.