As of two and a half months ago, I am a member of the Plainfield Board of Education. The following article is my opinion, and is in no way reflective of the views of the entire board. I give a very special thanks to education advocate Mother Crusader for the diligent research that contributed to this.

This June, Plainfield students will lose a charter school that has exhibited serious financial mismanagement, as explained in the state’s letter of non-renewal for Central Jersey Arts Charter School.

CJACS “failed to meet four of six applicable [finance] standards,” according to the New Jersey Department of Education, who also cited years of incomplete financial records and internal fiscal controls that contained “multiple weaknesses.” Back in 2014, the state casted doubt on whether CJACS could “generate sufficient cash flow to achieve or sustain operations in the future.” All in all, forty percent of charter schools that fail do so for financial reasons.

What a pity then, that the State of New Jersey has granted a charter to forces with a history of financial incompetence, at best, to operate here in Plainfield.

Mike Piscal, founder and executive director of College Achieve Public Schools, is rather fond of making a certain flashy promise to win over parents. “I guarantee that your kids will get into college,” Mike often brags, in one way or another. He already does so here in Plainfield, where his newest project, College Achieve Central Jersey Charter School, is set to open this September. The school will be kindergarden through fifth grade, and open enrollment has begun.

Mr Piscal is less interested in letting you know his history as the shamed founder of the Inner City Education Foundation, a large charter school management company in California.

As reported in the Los Angeles Times, ICEF leaders took pride in their “secret sauce”, a balanced program of “academics and extracurricular activities.” According to some parents, the more troubling secrets at the ICEF were the day to day behavior of its enigmatic leadership.

In the words of former Los Angeles United School District Board of Education President Caprise Young, ICEF exhibited “substantial bad judgement and lack of transparency with [its] finances,” which lead Piscal’s organization to a financial near-death experience in 2010. This is all despite cutting corners.

Apparently, employees complained of supply shortages, and were worked long hours with no additional compensation. It’s no suprise that teacher turnover ranged from 10 to 50 percent each year in ICEF’s schools, which served 4,500 students.

An even larger corporate charter school outfit, Alliance, wished to purchase the struggling company, but the sale fell though. It was ultimately new investors and uber-rich donors sympathetic to the charter school movement that prevented the total dissolution of the Inner City Educational Foundation.

As for ICEF’s founder, Mike Pascal, he had to go. According to the Los Angeles Times, Piscal resigned amidst the controversy in October of 2010. Los Angeles social justice writer and education advocate Robert D. Skeels, who followed the situation closely, asked in early 2011 “Where’s the money, Mike?” concluding that even if there was no criminal malfeasance, Piscal would have committed “the most unconscionably incompetent accounting of all time”. 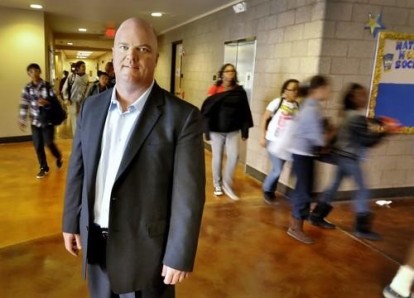 Now he is in our midst, making promises of college achievement to parents that want nothing more than to get there. At least initially, he brought one of his shamed ICEF friends along.

On his Board of Trustees during his first New Jersey application – which was denied – was Mike’s relative, John Piscal, CFO of ICEF from 2001 until 2007 before serving as the doomed outfit’s Chief Development Officer.

As Mr Piscal dashes around the country like a corporate executive – from California, to Vegas, to New Jersey – on behalf of his management organization, this blogger can’t help but question commitment that his self-proclaimed “entrepreneur” has for any given community.

We should all be asking these questions.

I suppose Mike Piscal’s arrival to the Queen City is representative of much larger issues concerning self-governance in black and brown America today.

From Detroit’s stint with state a appointed emergency manager overpowering the Motor City’s elected mayor, to the state appointed school superintendents in Newark and Camden, to unelected state monitors that regularly overrule superintendents elsewhere in our area, state governments are making decisions left up to locals in richer communities.

Perhaps the most pervasive form of subversion occurs when dozens of states grant school charters in poorer, working class, black and brown cities without the input of local populations, whose elected officials have no say on whether or not Mike Piscal and other fly-by-night education vultures can operate.

Should Piscal fail and head to, say, Atlanta, in search of another buck, who do we hold accountable? The amorphous “state”? Governor Chris Christie, who only received a small fraction of Plainfield’s votes during his last gubernatorial race?

Long after Mike Piscal is a distant memory, the endless turnstile of state-sponsored education entrepreneurs feasting on our public dollars will likely continue in Plainfield, which happens to be the only municipality in Union County with a single charter school.

Clearly, the state of New Jersey can’t see the real difference between local, community-lead charters and business ventures – or sound financial management from incompetence, for that matter.

School closures are devastating to students and families that make an investment in a school’s vision. These families are forced into tough decisions, and ultimately must reinvest valuable time readjusting to a new environment.

It is up to parents to educate themselves, and to take lofty promises from hungry businessmen with a grain of salt.