Let’s be clear, I like my commute. Except for one part.

When I recreationally commuted to the city, I didn’t think much of switching at Penn Station. You get off the train, go downstairs, and get on the next, right? Well, in theory.

It doesn’t always work out quite that way. The Newark switch throws in another variable – another suitcase to block an escalator, another crowded stair to get caught on, another train to be late. Yes, trains are late all the time. How late? The monitor will usually tell you, but don’t count on it.

With NY-bound trains at such small intervals, Newark Penn station is a mess on weekday mornings. Far from a stress-free transition, Raritan Valley commuters have no clue which train they’ll sardine into for the final stretch, and how long it will take to get to New York.

Trains from Newark to New York during just one stretch of weekday morning peak time. The eight o’clock hour has even more service through the two tunnels beneath the Hudson.

Chronic unreliability aside, stopping in Newark twice daily messes up the flow of my commute even on the best of days. It’s hard to relax, especially knowing that I’m in danger of skipping Newark on the way home, and that any routine delay may miss my connection.

After six months, I understand why this seven minute changeover affects property values and rental rates.

But last night there was no stop in Newark. Nope. It was the night of NJ Transit’s maiden nighttime voyage from Manhattan to High Bridge, leaving the Big Apple at 8:48pm.

The celebratory first ride was attended by Union County Freeholders Linda Carter and Bette Jane Kowalski as well as members of the Raritan Valley Rail Coalition, who held signs at the entries and distributed commemorative cards.

As for the actual ride, it felt every bit as good as I expected. Let’s hope the expansion of service continues. 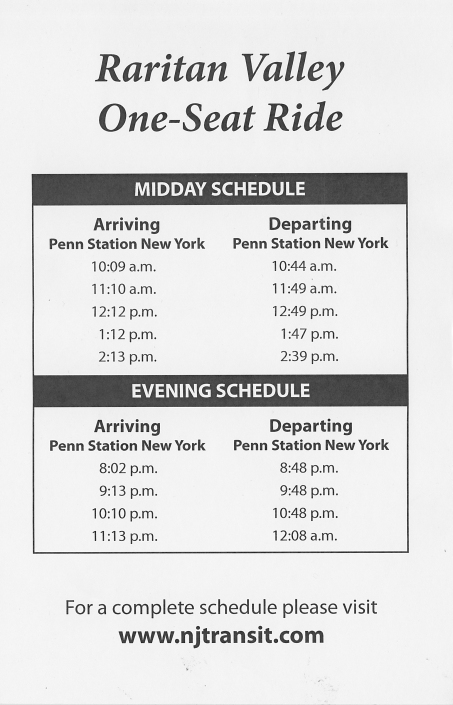 With the addition of the evening service, the RVRC’s brochure shows a total of eighteen weekday one-seat trains in and out of New York from the Raritan Valley