Sunday, September 7th will mark the third protest by the group now known as KYSS (Keeping Youth & Streets Safe), which formed in response to violence in Plainfield at the same time as the Ferguson protests in August. As their organization solidified and gained momentum, the second march comprised over thirty residents, an increase from the first. Organizer Nia Ali has stated a goal of fifty this time around.

While violence in Plainfield has thankfully slowed down in the two seeks since the last demonstration, our city continues to face a violence problem.  Plainfield’s wild fluctuations of murders and high profile shootings are no reason to desensitize ourselves to these acts, nor to accept living in the conditions that make them possible.

We should also not simply assume that this group will only make statements about violence. As those who know them understand, the young adults that brought KYSS together are highly political with takes on a myriad of issues. 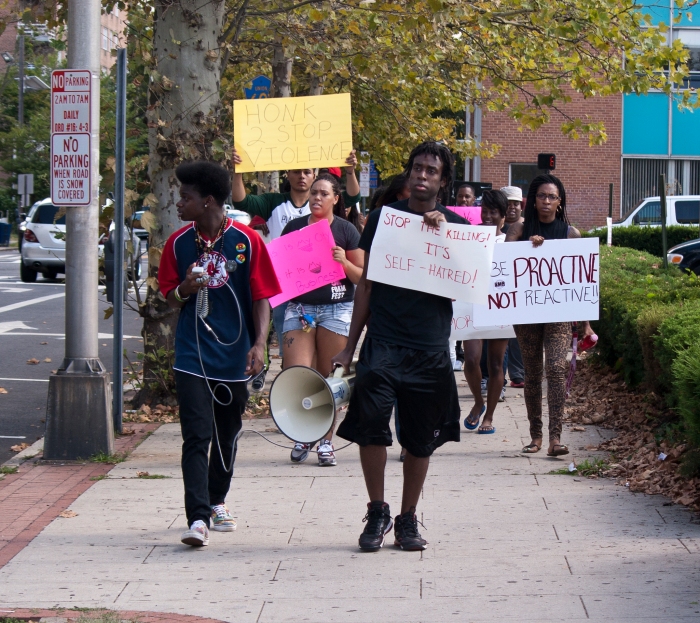 Seasoned activists often worry that people under thirty no longer grasp the importance of having a physical presence, especially with the advent of social media activism and an endless caravan of online petitions. Our generation does understand that you need to be on the ground, and KYSS leadership are evidence of that reality.

Nowadays, grassroots, local movements in the street by young people are a rarity, particularly in small cities away from universities. They only survive with community support.

On Sunday, September 7th, I urge you to alter your routes and pass down Park Avenue to honk your horns in support, starting with a rally at noon in front of Plainfield High School and continuing to Front Street. Even better, come out and talk for a few minutes. Accompany KYSS on the march. Speak with any media on hand.

In the words of organizer Sabrina Lyttleton, KYSS aims to “challenge the cultural, ethnic, and racial groups that coexist in Plainfield to come together as a community and serve the greater good.” That’s political organizing. Seize the moment, Plainfield – it doesn’t happen every day.

For an event of this scale, every body in attendance makes a difference. Fifty isn’t too much to ask.

One thought on “Why we should all support KYSS”