As some of you know, tonight is the first of three community meetings to be held this year about the Muhlenberg Hospital site. It will take place at 7pm at the Plainfield High School Cafeteria. I expect many of you to be there to express your concerns, as you should – and for at least a few important details to emerge.

Also this evening, the People’s Organization for Progress, who has consistently contributed to the fight to save Muhlenberg, will be holding its Women’s History Month event at 6:30 at Abyssinian Baptist Church in Newark. The featured guest is Sara Collins Rudolph, a survivor of the bombing of the 16th Street Baptist Church – a tragedy for which we just recognized the 50th anniversary last fall.

Additionally, POP will present achievement awards to Rudolph and four other women in recognition of their contributions to the struggle for social justice. One of these women is Dr. Willa Cofield, of Plainfield, who will be honored for her participation in the struggle against racial segregation in North Carolina. You may have heard of another honoree, Claudette Colvin, best known as the young woman in Alabama who refused to give up her seat nine months before Rosa Parks. Also recognized will be Theodora Lacey, an aide to Dr. Martin Luther King, Jr. during the Montgomery Bus Boycott, and Mildred Crump, the first Black woman elected to the Newark City Council. 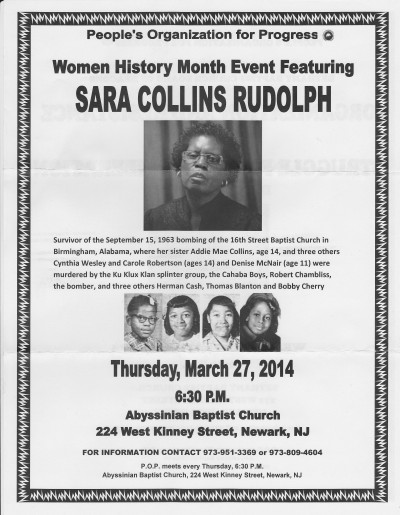 The flyer for tonight’s POP event

Two important events – one evening. What’s a blogger to do? Choose one, I suppose.

One thought on “POP event and Muhlenberg meeting; a blogger’s dilemma”