Don’t get me wrong, I do have thoughts on what happened on Friday night at the Democratic City Committee meeting. But afterwards, I wasn’t in the mood to write – I’ll let them out over the next couple of days. That being said, Bernice’s play by play was very thorough, as usual.

What I was excited about that evening was my upcoming first long bike ride of the season yesterday afternoon. I decided to get to Manhattan the only way that you can on your own power, over the GWB. Any other entry into the city by bike or foot uses the PATH, or a ferry.

I learned a few things on this ride. There are a lot of Park Avenues in New Jersey, way too many. I also learned that Bergen County has a lot of hills. Bergen County has so many hills that this ride was probably better suited for later in the season, on my future road bike, in warmer weather, without carrying 15+ pounds in my bag. Riding this Monday, Tuesday, and Saturday has been my first significant athletic activity since August. Nonetheless, I enjoyed it. 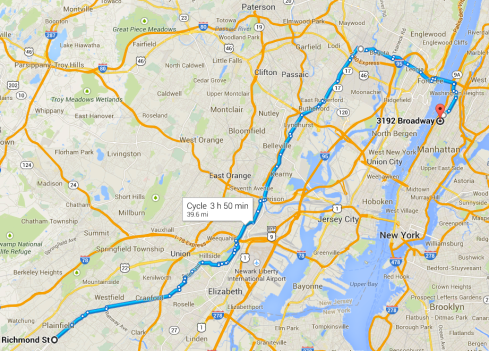 The approximate route I took, using Google GPS. It didn’t take as long as they said.

You only see one here, but I loved these twin, wooden bridges in Bergen County

The view from the GWB. I’d love to jump off this bridge – into a net, of course

Upper Manhattan from the bridge

Of course, a weekend can’t go by without working on the documentary Lost in the Wilderness, featuring Plainfield hip hop duo Negros Americanos. Yesterday, in Time Square, we conducted an interview with Harold Tomlinson, a well-known Panamanian skateboarder – and hip hop enthusiast. 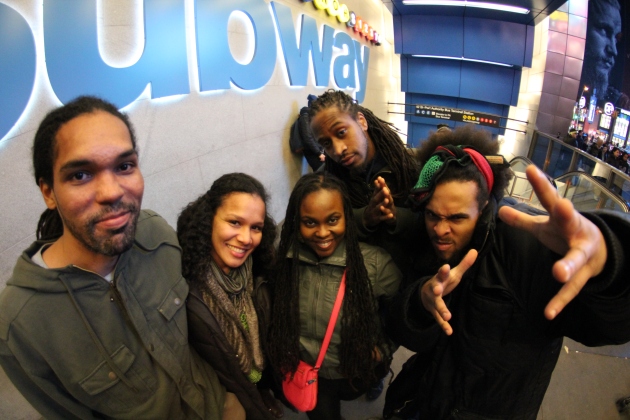 Tomlinson, on the left, and the rest of yesterday’s crew.

It was a good day.

One thought on “A late winter’s bike ride to Harlem; the Documentary continues”