Just before the end of Sharon Robinson-Briggs’ final term as Mayor, Angels for Action held a press conference with the former Mayor about their ID program, which the previous administration gave their full support. Plainfield View covered that story here. A secondary theme of the gathering was the fact that the incoming Mapp administration had already expressed a lack of support for their efforts. Carmen Salavarrieta, Angels for Action’s Director, said she was ready for a fight to keep providing identification to residents. At that point, the group had a waiting list of 2,000 names.

On Friday January 31, Police Director Carl Riley arrived at Angels for Action’s West Second Street Headquarters, behind PNC Bank, and demanded that they stop production of ID cards immediately, serving them with a cease and desist notice. Both sides have very different versions of the story.

Adrian Mapp, who views this program as using the seal of the city for personal gain, claims to have received complaints from members of the Latino community who felt that they were taken advantage of by Salavarrieta. In fact, the very day before the program was shut down, Mapp tells Plainfield View that a local group of Latinos not only expressed their feelings of having been exploited to him, but that they feared for retaliation from Angels for Action. Additionally, these people want a refund, says Mapp.

“There were concerns that the documents they provided could be used in an inappropriate manner,” says Mapp. “They requested the City’s assistance in retrieving their documents. They also want the money that they paid for the useless piece of paper returned to them.”

This useless piece of paper, according to Mr. Mapp, is not accepted by banks and other financial institutions, by the police, or by most businesses. “Additionally,” adds the Mayor, “the card was being pedaled under the guise that it was supported and sponsored by the City and our Police Department. It is not.”

“So many lies,” says Salavarrieta. 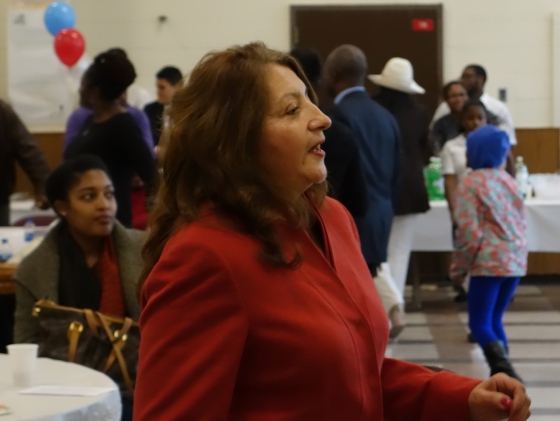 Angels for Action claims to have written proof from the Plainfield Police Department stating that the ID cards will be accepted, just as they are in Trenton and Princeton. Even with this cease and desist order, Carmen Salavarrieta encourages residents to use their already issued cards.

“Mapp supporters went to different businesses saying that the card was false, claiming that I was lying when I said it is accepted by the Police Department,” says Salavarrieta.

While she has expressed the willingness to fight for the right for residents, largely undocumented immigrants, to be able to have an identification, Salavarrieta, originally from Columbia, stresses that the goal is to be working with the city. “It’s good for them to have people with IDs,” she says. “We want to convince them how important it is for the city.”

The group cites several occasions where people have died, without identifications, requiring that pictures of the dead bodies be shown to people in the area to see who knows them.

Angels for Action dismisses the notion of profiteering, explaining that the $10 fee only covers the cost of expenses. Five volunteers run the operation on one machine. They point out that identification through drug stores and other businesses have traditionally costed much more.

Another of Angels for Action’s gripes is that the new Mayor didn’t bother to find out how the program was run, first hand. They claim that Mr. Riley’s cease and desist order was essentially the first direct contact between Angels for Action’s main office and Mapp’s City Hall.

Salavarrieta, who, like Mayor Mapp, immigrated from another country, claims to have approached Mapp at the Frontiers Martin Luther King breakfast, telling him that they needed to sit down and talk. The Mayor said that his schedule was full, and his staff never got back to Angels for Action about a meeting. “He doesn’t even bother to investigate it,” declares a frustrated Salavarrieta.

She is quick to remind the public that it is not only latinos and undocumented immigrants that want these cards. Puerto Ricans, Antiguans, Jamaicans, and others have expressed to her a need for identification. Salavarrieta says that Angels for Action also aims to help those who are coming out of prison.

“We will continue this fight,” says Salavarrieta.

Mayor Mapp seems equally determined to limit identifications to those issued by the state.