In this country, with its long standing role as an important part of the American Dream, home ownership is almost fetishized. Consequently, renters in many areas are stigmatized compared to their homeowner counterparts. According to Bill Deegan, CEO of advocacy group Renter Nation, there is an “unfair, negative image of residential renters.” Of course, countless tenant associations in large cities across the country fight for their stigmatized renters, especially those with low incomes to moderate incomes, in a much more active manner.

Government spending is strongly in favor of those who own. In 2009 alone, the government dished out a record $280 billion in subsidies for homeowners, according to the Congressional Budget Office, and only $60 billion for renters. In 2012, that homeowner figure had only sunk to $240 billion. The mortgage interest tax credit alone is greater than all aid to renters. Since the financial crisis, much has been made about the struggles of homeowners – and rightfully so.

However, today, renters now make up at least half of the population who experiences severe housing cost burdens in the entire country. In many lower income urban areas, the increased struggle of renters has long been the case – along with their increasing propensity to be displaced. Half of renters pay over 30% of their income on housing, which constitutes unaffordable. A full one quarter of renters pay at least 50% of their income on housing costs. For households in the lowest income brackets, the portion of those who pay more than half in rent and utilities is as high as 80%. This, as well as the proportion of Americans who rent, will only increase as there are more and more seniors. Nevertheless, the assistance for homeowners still disproportionately outnumber those of renters year after year.

Interestingly, homeowner subsidies inherently benefit those with more wealth, since less wealthy people are more likely to rent. Look at the chart below showing the housing assistance totals granted to people of different incomes.

Even the gross figures give you a sense on low little help people in some income brackets get via housing. If that chart makes you think that poorer people get decent assistance compared to the rich, let’s put the under $20k and over $200k figures into context – per capita.

Not to mention that rental assistance programs don’t reach everyone. The type of assistance that helps homeowners is far more across the board. 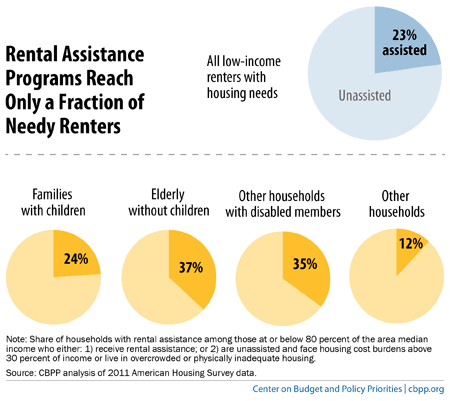 While there are many poor and struggling homeowners who deserve strong assistance, it’s still slightly worse to be a poor renter.

All of that being said, during last Monday’s council agenda fixing session, following the dispute over high property tax interest rates, fellow blogger Bernice Paglia came to the mic to speak on behalf of the majority of Plainfielders – its renters.

Paglia, who has lived in her apartment over twenty years, recounted how her rent went up 17% at once recently when the property was sold to a new owner. There was nothing that she could do. “What is the recourse for renters?” she asked. Apparently, there was an attempt at giving renters a way towards remedying their hardships.

According to Bernice, the last time there was any representation for tenants was when John Bramnick was on the City Council in the 1980s. He proposed a board where you would have been able to tell your story to see if anything could be done. I am not sure how effective this would have been, nor do I know the political context. If this was, for example, a modest proposal to undermine more substantial pro-tenant measures, that would be different. Nonetheless, this certainly means that a real debate on these matters took place recently in Plainfield.

As Bernice pointed out, so many of the new projects on Plainfield’s doorstep involve rental units, meaning even more of us will be tenants. Will there be a means of recourse or protection for Plainfield renters? Whether or not Plainfield’s leadership thinks that there needs to be additional local protections for those who lease their homes from unfortunate occurrences, like 17% rent increases, they ought to be asked to explain why or why not, at some point.

“Think of the renters,” concluded Bernice to the City Council. “There’s a whole lot of us out there.” I thank her for starting the discussion.

If you haven’t read my somewhat related post about a living wage in Plainfield, check it out here.