Angels for Action held a press conference today at noon in the City Hall Library to update Plainfield regarding its Identification Card program. Mayor Sharon Robinson-Briggs and Angels for Action director Carmen Salaverrieta lead the event, which was observed and recorded by Univision Nueva York 41.

Since the last press conference in November, rumors have swirled, according to Robinson-Briggs and Salaverrieta, and both tried to set the record straight. The mayor cited two rumors, that there is a “very high fee” for these cards and that they will not be issued after December 31. Both, she says, are false. The cards cost $10. Another inaccuracy, that drivers’ licenses will be issued in and by the city of Plainfield shortly, is also untrue as only the State of New Jersey can issue licenses.

According to Salaverrieta, the cards issued by her organization will be accepted by PNC Bank, Bank of America, the Plainfield Public Library, and the health centers. “People are very happy to be able to have their ID,” said Salaverrieta, “and to not have to carry their passport, which they can lose. It’s very difficult to replace a passport.” Princeton and Trenton both have a similar ID card system. It’s not just undocumented workers, she argues, “we have seniors who want identifications, too.” 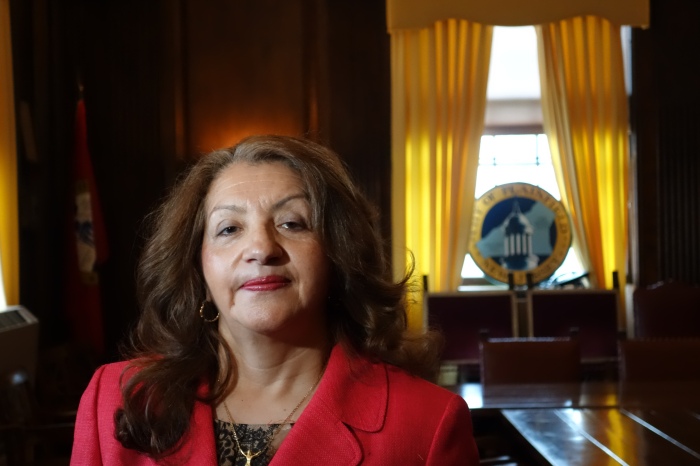 As of now, Angels for Action has issued around 250 identifications. Their waiting list, on the other hand, has over 2,000 names. With only one machine and two technicians, they are overwhelmed, according to Salaverrieta. She dispelled rumors of profiteering, saying that their fee only covers the costs of the operation. The cards are of high quality with a hologram, very much like a state issued drivers license. Before the technicians make the cards, a team carefully handles the required documents.

Denise Campbell, of Woodbridge, details a sense of “dignity” afforded to undocumented immigrants through ID cards. Campbell was undocumented herself until several years ago. Beneath her hands rests the 2,000 name waiting list.

Mayor Robinson-Briggs reminded all that Angels for Action’s identifications are only their latest initiative, and that they have been involved in ESL and computer education, helping those in need gather documentation, and other services. Their website is http://www.angelsactioninc.org.

An Angels for action volunteer looks on as Francisco Ortez shows his identification card.

Mayor-elect Adrian Mapp, who takes office on January 1, believes that an identification program sends the wrong message and does not want to give the city’s endorsement. In November he told the Courier News, “I would not want to mislead residents in any segment of our community by giving them the idea that this piece of paper is something that they can use and would be accepted by law enforcement or by businesses in general,” Mapp said.

Apparently, according to Angels for Action, businesses and local establishments are willing to accept these ID cards. Angels for Action appears ready to fight the new administration over this issue, which should play out in the very near future.