This afternoon a contingent of concerned citizens braved cold temperatures and steady snow to take a stand against violence in Plainfield. The Newark-based People’s Organization for Progress continued its long tradition of public, outdoor demonstrations at the corner of West Third Street and Manson Place, at the very spot where Dawud Hicks was lost far too soon last week, at age 21. As stated by event organizer Steven Hatcher, “our kids get shot in the coldest of winters and the hottest of summers,” noting that they will be killed in blizzards if we don’t do something about it. The attendees, which peaked at eighteen or so, included activists, community leaders, friends and family of Dawud Hicks, and at least a handful of residents who joined the rally as they passed by the intersection. 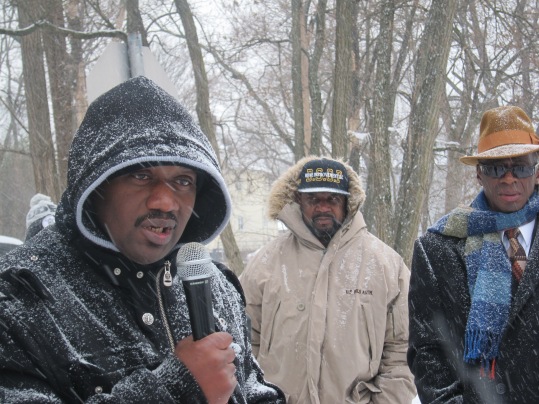 Andre Kelly, a chief organizer of the 2011 gang truce that saw murders plummet that year, reminded the crowd of how national of a problem violence is, citing the fact that more black young people are murdered each year in America than all soldiers killed in Iraq and Afghanistan over the course of more than ten years. “We are here for the people that have died in violence,” proclaimed Kelly, adding that “we are not going to go to a funeral and then just go home and chuck it up, like ‘that’s it’.”

Marvin Williams speaks about his youth in Plainfield

Life long Plainfield resident Melvin Williams, also pointing out that violence has become the accepted norm, called for members of the community to keep coming together to be able to change this. Calling today’s violence scary, Williams recalled that in his youth, they didn’t handle disputes like this. “At [a young] age we didn’t even have guns. The whole community would beat you down. We had to watch out for Ms Lane, you know. [Older people] were on patrol.” 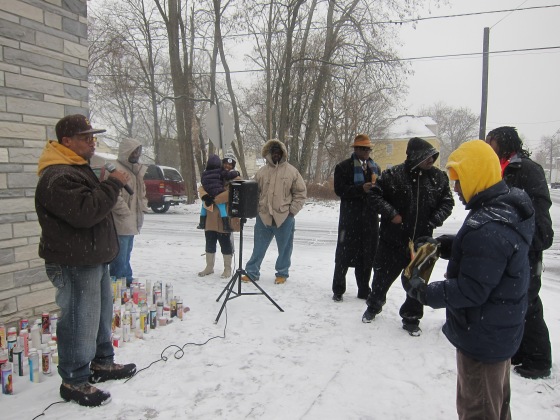 Norman X Johnson, another life long resident of the city, saw this frigid, 23 degree meeting as the beginning of something bigger. “I don’t need my hands to get warm,” declared Johnson, also known as Raheem Abdullah Shabazz, “I need the movement to get hot.” He added, “We don’t need to get discouraged by these numbers. What we need to do is get encouraged by the unity of the people involved.”

Friends and family of Dawud were appreciative of the show of support. “We all have to go,” declared Hicks’ cousin Tanaya, after thanking everyone for coming out, “but how you go is what matters. How he went hurts…My family is hurting.” She continued, “everyone has their faults, but in life you live and your learn, and hopefully people learn from this.”

One of Dawud Hicks’ best high school friends, Dion, was one of several young men who came out. “What happened last week really took a toll on me – it hurt me a lot. I really really hurt, and I do want you all to know that I appreciate you for being here because if Dawud was here, he would really be humbled.” 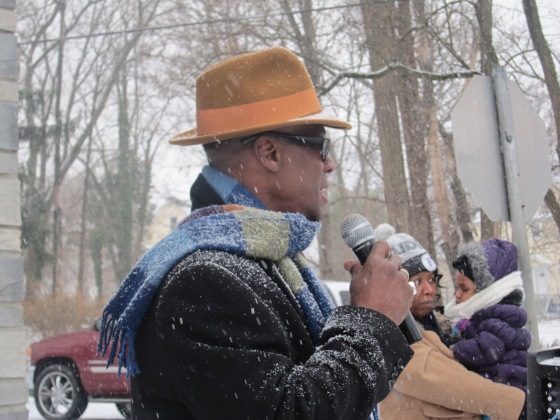 Mustapha Muhammad calls for a concerted effort to end violence

Recent mayoral candidate and community activist Mustapha Muhammad made a plea for collaboration. “Unity is our strength. We need to unite,” said Muhammad, who stressed the need for jobs, vocational skills, recreational activities, and a quality education. “This will not happen overnight,” thundered Mr Muhammad. “Rallies are a means to an end, but we need to organize. This is about a movement!”

It’s undeniable. We do need a movement to make Plainfield a better place. While this rally unfortunately happened under the absolute worst circumstances, people from various organizations and political persuasions were talking over the course of this hour or so about coordinating their efforts to make a positive difference in the city. They were discussing continuing the momentum moving forward, even when there is no candle-filled street corner or grieving family. It’s time that concerned people in Plainfield engaged young and old alike, hit the streets, and even make demands of leadership – not just during election time. These are the ways that real change happens. 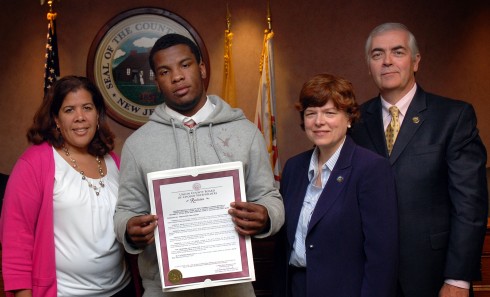