Michael Sullivan, lead planner of Trenton based architectural group Clark, Caton, and Hintz, was on hand at tonight’s Planning Board meeting to discuss the Elmwood Gardens Redevelopment Plan on which the firm is working. The group was engaged this summer to work on this plan that sets forth goals and objectives for the future building on the site.

In his opening, Sullivan emphasized that this study is not very descriptive, but creates “window in which developers can work to create a nice neighborhood.” Sullivan explained that the proposal to replace Elmwood Gardens calls for “affordable, multi family homes.” His firm figures that the site can support 18 units per acre. Clark, Caton, and Hintz assumes that, due to the width of W Second St, there is ample room for parking on the street. Their preference is for reverse angled parking. Because affordable and low income housing often requires less parking than general multi-family housing and because there is transit nearby, Sullivan proposes 1.1 spaces per unit, lower than the state requirements. The plan calls for a community space.

After Michael Sullivan’s rundown, the Planning Board dug deeper on the following areas.

Vice-Chairman Ron Scott Bey asked Mr. Sullivan if the community space was for the entire community or only the residents of this building, to which Mr. Sullivan responded that there’s no specification either way, but that in multifamily communities there needs to be some sort of communal space on the site, whether attached to the housing units or free standing. 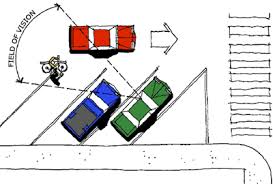 Several Board members expressed concern about drivers understanding reserve angle parking, which requires that residents back in and pull out. Mr Sullivan argued that this was the safest option, but conceded that there is an “educational process” during which residents and guests would have to get accustomed to it. He couldn’t point to any examples in New Jersey of such a parking arrangement, but his firm did work on one in Pottstown, PA. He argues that it is safer than traditional angled parking because it doesn’t involve backing out into traffic. My take: Personally, I have never worked on a project where we used this sort of parking nor have I come across it as a driver. Admittedly, if this parking is double-loaded, I’d probably pull into a spot, head-first, on the opposite side of the street before bothering to back into a space on my side of the road.

Will Elmwood Gardens residents be allowed to come back?

While it was beyond the scope of anything Mr. Sullivan could answer, Board Member Sandra Chambers asked how many Elmwood Gardens residents will be able to return to the new building(s) on the site. Chambers, who was raised in Elmwood Gardens, explained her emotional attachment to the site and her compassion for those who called it home. She was told that Randall Wood could address her question towards the end of the meeting, but Chambers had to leave before then. According to Bernice’s post two years ago, which cited the same 18 units per acre figure given tonight, the site would hold 69 units, roughly 58% of the 119 at Elmwood. This doesn’t answer her question of how many of these residents would be from Elmwood Gardens. I hope to hear the answers to these questions at some point.

Updated 12/6/13 1:09am: per Bernice, who attended the City Council special meeting that I missed on November 26, “[That night] Wood said all the Elmwood Gardens tenants have been relocated.” Here is a link to that post. The question still remains as to whether anyone will return to this site, and where they’ve been relocated.

Councilor William Reid asked about provisions for recreational and commercial space. Commercial space is not permitted. Recreational space is not mandated, but is allowable, explained Sullivan. As Hannah Atkins park is not far away, he suggested that recreational space might not be necessary on the site. The Board, lead by Mr. Bey, responded resoundingly that all possible efforts should be made to have open space on the site, especially considering there has always been a basketball court there. “It’s not enough to say there’s a park two blocks away,” said Bey.

The architect on the Planning Board, William Toth, brought up the prospect of environmental, LEED certified architecture. Sullivan explained that LEED certification is so expensive that many of his firm’s clients can’t afford it, let alone a developer of low income housing. Often, however, they build an environmentally friendly building for the benefits it provides, only lacking the official $50,000 LEED declaration. The Board wanted this emphasized as part of the plan.

Crime was of great concern at Elmwood Gardens. Sandra Chambers wanted to know how those concerns can be addressed through design. Sullivan noted that the standards they are dealing with require street frontage, porches, and individual entryways to the units. The Planning Division informed Clark, Caton, and Hintz that the police are looking to see individual entrances close to the street as obscured, communal entrances gave them problems at Elmwood.

For any planner or designer, there is always a fine and dodgy line between considering feasibility and affordability too much or, on the other hand, neglecting it. The message to Clark, Caton, and Hintz from the entire Planning Board, particularly from Chairman Robertson and Vice Chairman Bey, was to keep their options open, even going as far as throwing out the idea of the Housing Authority buying property to expand the site if it brings enough benefit to the project.

As Sullivan repeatedly, and somewhat understandably, evoked conditions he thought a developer would find feasible for the site and its impact, it began to wear on Bey who remarked, “our concern is not what the developer is going to tell you. We are asking you to design this based on what we are anticipating. A developer is always going to tell you what works based on their needs. We don’t work that way.” Sullivan countered that there must still be a “dose of reality.” In explaining that he’d like to give the developers a challenge, Bey remarked, “there’s a flee for every dog,” in explaining that once the city’s best interests are served by an appropriate plan, there will be a developer that wants to do business.