Fifty years ago, at the 1963 March on Washington, A Phillip Randolph demanded a $2 an hour minimum wage after a study determined that such a wage was necessary to fill the needs of Americans. This demand would be equivalent to a $15.25 today. By the late 60s, the minimum wage had been brought up to around $10.00, in today’s money – still inadequate. Meanwhile, if you account for technology related increases in worker productivity over the last several decades, it would be $21.72. Apparently, employers have benefitted from these advancements, not workers, whose wages have fallen.

Today, the conditions are far more shameful for workers than in the 60s, particularly in the food service and retail sectors where a large portion of workers are at or slightly above the minimum threshold. In the state of New Jersey, minimum wage sits at an ungodly $7.25 and will rise to an insulting $8.25 in early 2014 due to a ballot initiative in the November 2013 elections. This often doesn’t include paid leave, quality medical insurance, and the ability to effectively unionize.

Even during conservative Richard Nixon’s term in office, the national discussion was about a guaranteed annual income. The rightfully despised Mr Nixon himself made a proposal, which, while considered modest for its era, would have helped the working poor infinitely more than anything either political party presents us with today. Nowadays, so-called “progressive” Barack Obama has long-proposed a $9 an hour minimum wage, only recently agreeing to go up to $10.10. Every negotiator knows that you go to the table with a good, morally acceptable number, and that in these sorts of negotiations you end up getting less than you first figure. It’s not even just a wage issue, as workers are often given less than 30 hours to avoid benefits, making even a living wage inadequate and something like a minimum income the real discussion.

Some New Jerseyans, while others shopped, said no to the continued erosion of workers’ quality of life. The target was Walmart, the industry leader and precedent setter in the retail world, long known for it’s worker abuses despite its new misleading ad campaign to claim otherwise.

In Manville, roughly a dozen protesters assembled outside of Walmart on Main Street. This was a “worker requested” protest, meaning that employees from this particular store demanded it.

Organizers, from NJ Youth Against War and Imperialism called this “the beginning of an effort led by Walmart workers and their community supporters to change the way that the company relates to the people who do the work that keeps their profits going”.

Aside from poverty wages, lack of paid leave, and poor or no medical coverage, many retail workers, at Walmart in particular, are faced with sparse opportunities for advancement within their company.

According to the NJ Youth Against War and Imperialism’s statement, they will never “give up the fight for a livable wage, full benefits, a reasonable schedule, and overall…fair treatment.” 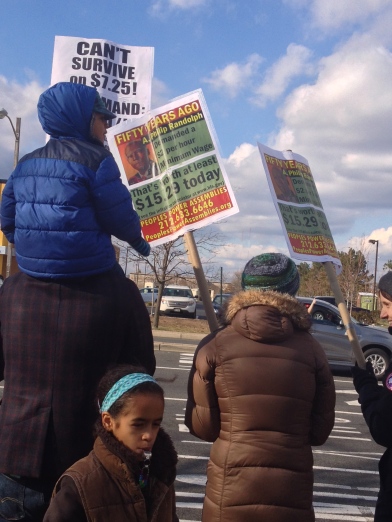 In Secaucus, NJ, around 200 protesters gathered outside Walmart and Walton Family owned Sam’s Club. Attendees came from New York City and the entire region, as this is the closest Walmart to Manhattan. 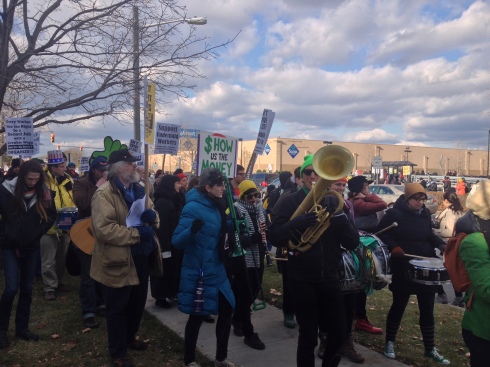 A march ensued and several demonstrators were arrested while engaging in civil disobedience. I took a video of their disobedience and arrest below. 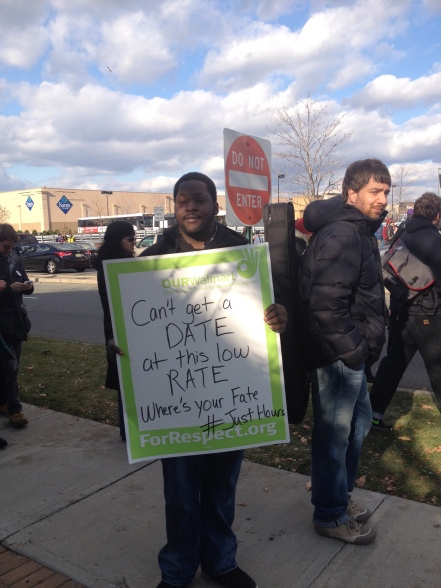