At tonight’s Planning Board Meeting, amendments to various zoning regulations were discussed and voted upon. One such amendment was proposed by Planning Director Bill Nierstedt, who opened by mentioning that ordinances that do not permit signs in the public right of way are unconstitutional. According to Nierstedt, Plainfield has one of these unconstitutional ordinances. 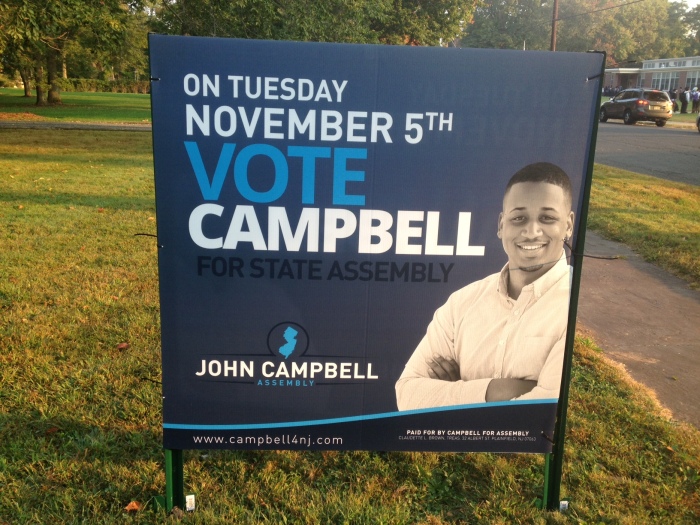 Instead of simply lifting a ban of all signs in the public right of way or attaching rules to public signs, he inexplicably proposed rules outlining size, and duration limits, for all political signs, including private signs. I wondered “Why now?”, then realizing that the only large signs that I could think of are John Campbell’s, that are appearing on private property. Nierstedt proposed a 2′ x 2′ size limit along with a sign placement limit of two months before the election and one week after. It’s worth noting that time limits for signs has also been a civil rights concern fought against by New Jersey’s ACLU, if the goal here is constitutionality. The measure would go into effect in January 2014. A few board members had enforcement concerns, a couple of others expressed fondness of South Plainfield’s large signs, and Councilman Bill Reid asked how this would affect the long tradition of leaving signs up from the primary until the general election – he was told it would be against the law. Generally, though, it seemed that the measure would pass despite a clear lack of objection to large signs on the part of almost all board members. 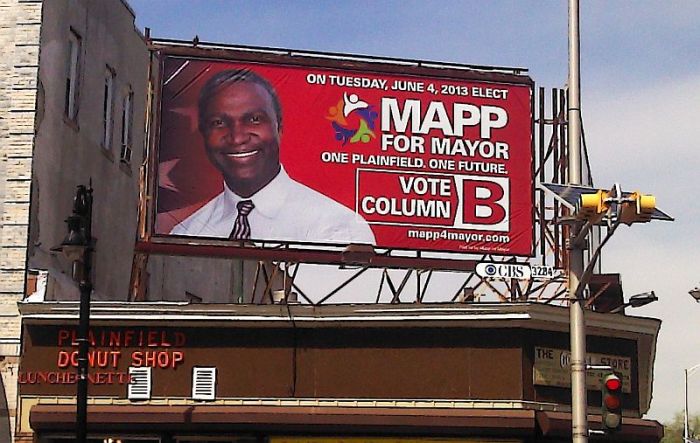 Then, Board Member Sandra Chambers mentioned a prominent large political sign from earlier this year, Adrian Mapp’s at Second Street and Watchung, clearly larger than 2′ x 2′. Mr Nierstadt reread his amendment and contemplated before agreeing with her assertion, that a billboard is just as political as a yard sign, and that political billboards would also be banned under this ordinance. To avoid doing so, he opted to scrap the size limit and keep the maximum duration. The board voted in favor of this change.

Another political sign issue was brought up shortly afterwards: the instances where candidates line up several of their own identical signs on public or private space. Board members suggested all sorts of ways to remedy this problem – minimum spacing of 10 feet apart, only one of any given sign per property, only one sign in any given “area” – but for every rule there was a worthy exception. Additionally, Chairman Kenneth Robertson insisted that these sorts of rules would be almost impossible to enforce and that people “would do it anyway”.

The planning board ultimately decided to put the matter in the hands of an attorney. The attorney will deem whether or not trying to ban multiple, identical signs close to one another is possible or if it is not worth the legislation and enforcement issues that it may entail.

One wonders, though, why did we have this flirtation with size limits now? This hasn’t been an issue in Plainfield and the only person in the room who was passionate about sign size was Mr Nierstedt himself. Perhaps, as one could very reasonably assume, this was spurred on by opponents of John Campbell’s 4′ x 4′ signs – but why, then, were these signs never explicitly mentioned in the conversation? Either there is a monumental coincidence here or there is a lack of transparency. Let’s stay tuned to developments, which will better explain the situation.