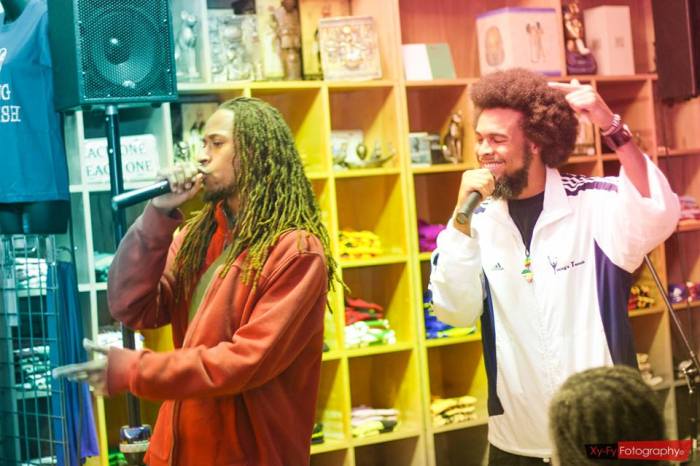 It’s increasingly popular for young people to go and teach English abroad after college – I did so myself, in France. Most of us return with better knowledge of a new language, get a new perspective and a better understanding of culture and the world, make life long friends, and have some great stories to tell. Exceptional people – like Mc Enigma and Bishop the Eastside Nappyhead – well, they do all of that and form a bilingual music group. Keep in mind that before this trip they spoke very little Spanish. By the time they left the country, the live hip hop scene in Panama City was already feeling their presence and their songs even played on Panamanian radio.

Upon their return to Plainfield in early 2012, Negros Americanos hit the ground running. For a stretch, they performed several times per week in front of all sorts of crowds, big and small, from Washington, DC to Massachusetts. The response was great, and with electric live performances they have been steadily climbing the ladder in this much harder to crack New York hip hop market ever since.

On Friday night, they headlined their own show in downtown Brooklyn at Nicholas on Flatbush Avenue. This store sells natural body products, clothing and accessories, hats, and anti-Imperialist and Afrocentric books, amongst other products. Nicholas also doubles as a comedy and concert venue at night, holding upwards of 70 or so people comfortably. This was the second show at Nicholas that they’ve headlined, and it was worth the price of admission.

Since their start rapping back in 2001 at Plainfield High School, MC Enigma and Bishop the Eastside Nappyhead have explored increasingly relatable topics. One such track is “Regular Guy” where Bishop talks about the trials of being a – regular guy (see it performed in the clip above – along with “Pariah” by MC Enigma). In the song “The Biggest Herb”, they both complain about women dumping them for muscular, suave, clean cut men. Negros Americanos also brings realness, as in anti-imperialist anthem “Confessions” on which both artists feature. In a popular song called “Charlie & Raheem” Bishop explores the struggle against Charlie, representative of Uncle Sam, and Raheem, representative of people within the black community that cause terror. Bishop also makes Spanish funk, one example being Rakatakas, whose video (shown below this paragraph) is shot on location in Costa Rica. In Friday’s extended one hour set, following a host of opening acts, they performed all of these songs along with new material, their down-to-earth style reminding listeners of how out of touch so many hip hop artists are today.

With influences as varied as Wu Tang Clan, “Saturday Night Live”,” Redman, and Plainfield’s own Parliament Funkadelic, Negros Americanos puts on an engaging, interactive live show worth being a part of. To know what they are up to, visit their website, follow  @mcenigmajersey @bishopnappyhead on Twitter, and like Negros Americanos on Facebook. Be sure to visit Bishop’s travels, Bishop’s entertaining travel blog, and one of my favorites. The next time that they headline a live show I’ll let you know – beforehand.

One thought on “Meet Plainfield’s own Negros Americanos”